Thai Pass 'bugs' to be fixed

A visitor is at a Thailand Pass checkpoint at Suvarnabhumi airport in Samut Prakan on Nov 2. (Photo: Wichan Charoenkiatpakul)

The government is stepping up efforts to fix the Thailand Pass system after glitches following its launch last Monday when the country reopened to foreign visitors, a government spokesman said.

The move comes after complaints by some tourists that they had either experienced delays in receiving QR codes or in some cases had not received them at all, following the approval of their travel applications.

Government spokesman Thanakorn Wangboonkongchana said on Sunday that Prime Minister Prayut Chan-o-cha has been alerted to the problem and instructed state agencies to fix the new online system which was supposed to streamline the administration of travel and health requirements for both Thai and foreign travellers.

Those wishing to visit the kingdom are advised to follow the instructions at tp.consular.go.th.

Immediate approval was one of the highlight features of the platform for applicants whose vaccine certificates can be verified online by QR code, provided the issuing country has supplied the necessary "public key infrastructure (PKI)" for Thai authorities to verify the document.

The Department of Disease Control (DDC) also carries out inspections according to the criteria set by the Public Health Ministry. A system has been put in place to verify Safety & Health Administration (SHA)-Plus accommodation bookings and alternative quarantine (AQ) systems. 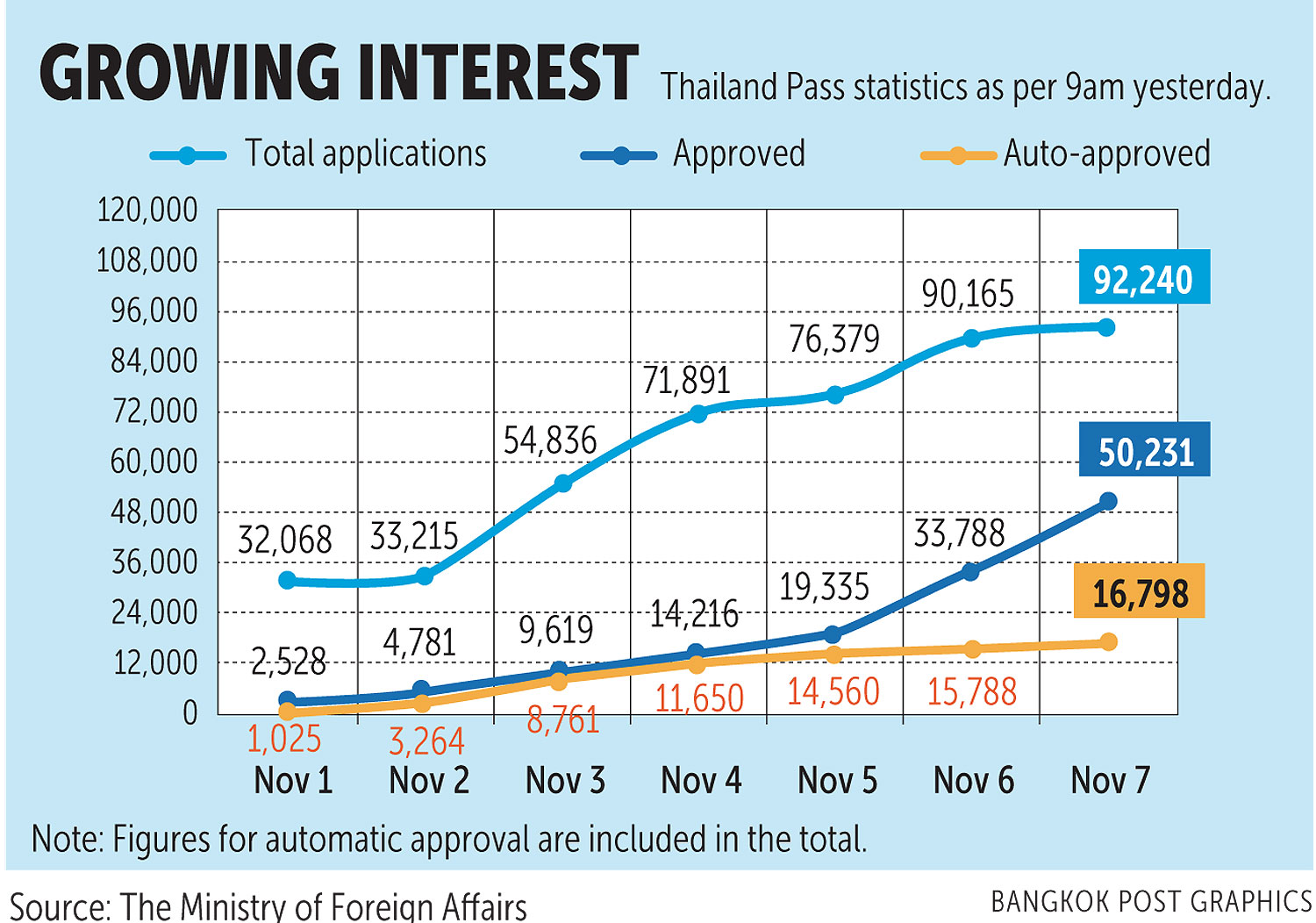 Once they have received approval, travellers can download the Thailand Pass QR code which enables them to prove their eligibility to airline and screening officers. They must also present negative Covid-19 results from test taken no later than 72 hours prior to travel.

Mr Thanakorn said that the Ministry of Foreign Affairs is working with the Digital Government Development Agency and the DDC to improve the system.

For example, drop-down lists of hotels affiliated with the hospitals where they have their tests will see information passed forward and reduce the onus on travellers to repeatedly present documents proving their present Covid status.

Efforts are also being made to add more countries to the current list of 30 that have supplied PKIs to enable authorities to validate their vacine certificates, Mr Thanakorn said.

Verification of vaccine documents will now take no more than three days, compared to the previous seven, he added.

He also explained why some applicants had not received their QR codes.

In some cases, uploaded vaccination documents had proved to be unintelligible, prompting Thai officials to resort to manual verification which takes much longer than the automated procedure, Mr Thanakorn said.

In some cases, the hotels that visitors had booked were not linked to hospitals that conduct RT-PCR tests, he said.

Jirapong Songwatcharaporn, a Pheu Thai MP for Nonthaburi, said he had received complaints from Thais overseas who registered for Thailand Pass that the system was slow, with many conditions.

Some said they booked their flight one year in advance to return to Thailand, but when they were about to fly, their applicatio proved still not to have been approved, Mr Jirapong said.