A member of the Protect Chana Homeland group speaks during a rally outside Government House on Dec 14, 2021 against a government plan to build an industrial park in Chana district of Songkhla province. (Photo: Nutthawat Wicheanbut)

Non-governmental organisations (NGOs) are preparing a vigorous campaign against a controversial draft bill to police their activities.

The first skirmish could take place within weeks as the Social Development and Human Security Ministry will sponsor a public forum to sound out opinions on "the draft bill on activities of non-governmental organisations" after the cabinet on Jan 4 agreed in principle to back the bill.

Critics suspected the neutrality of the public forum, whose date has not been set, as it will be organised and could be controlled by the state organiser.

Patcharee Arayakul, the permanent secretary for social development and human security affairs, has said the ministry is open to all comments from the public before sending them to the cabinet for consideration.

"Civic groups are mobilising NGOs at all levels to make clear to the ministry their opposition to the draft bill," she told the Bangkok Post. "Everyone will be affected by this bill."

Its name — "the draft bill on activities of non-governmental organisations" — does not sound too sinister, with a stated goal of fostering cooperation between the state and NGOs for "transparency and public interest". It is what's inside the bill that worries activists.

It says their activities must not pose "a danger to national security and law and order" — concepts open to a wide range of interpretation — while violators could face several charges, including money laundering after probes into their financial sources. The document was produced by the ministry and the Anti-Money Laundering Office.

NGOs will be required by law to disclose their mission statements and the sources of their funding, according to the document.

The draft bill immediately drew strong opposition from NGOs, who cried foul over the government's move to control their activities by threatening their sources of funding.

A total of 1,867 NGOs across the country — from those working on human rights to social welfare and health — issued a statement on Jan 7 bluntly opposing it. "All civic groups will not accept it and will do all they can to oppose the draft bill until it is withdrawn," they said.

Government spokesman Thanakorn Wangboonkongchana tried to calm them down after the draft was approved in principle by the cabinet, saying the bill was conceived in the best interests of the public, and its scrutiny was above board and transparent since it will be subject to public opinion.

The civic groups argued in the statement that the draft violated freedom of expression and other basic rights stipulated in the constitution.

Nirand Pitakwatchara, a former member of the National Human Rights Commission, agreed with their concerns. "This draft bill wants to control NGOs. To be precise, interference should be the right word," he told Chulalongkorn University's CU Radio on Friday.

The promotion of the bill showed the government's authoritarianism and its mentality of seeing civic groups as adversarial, the human rights advocate added. 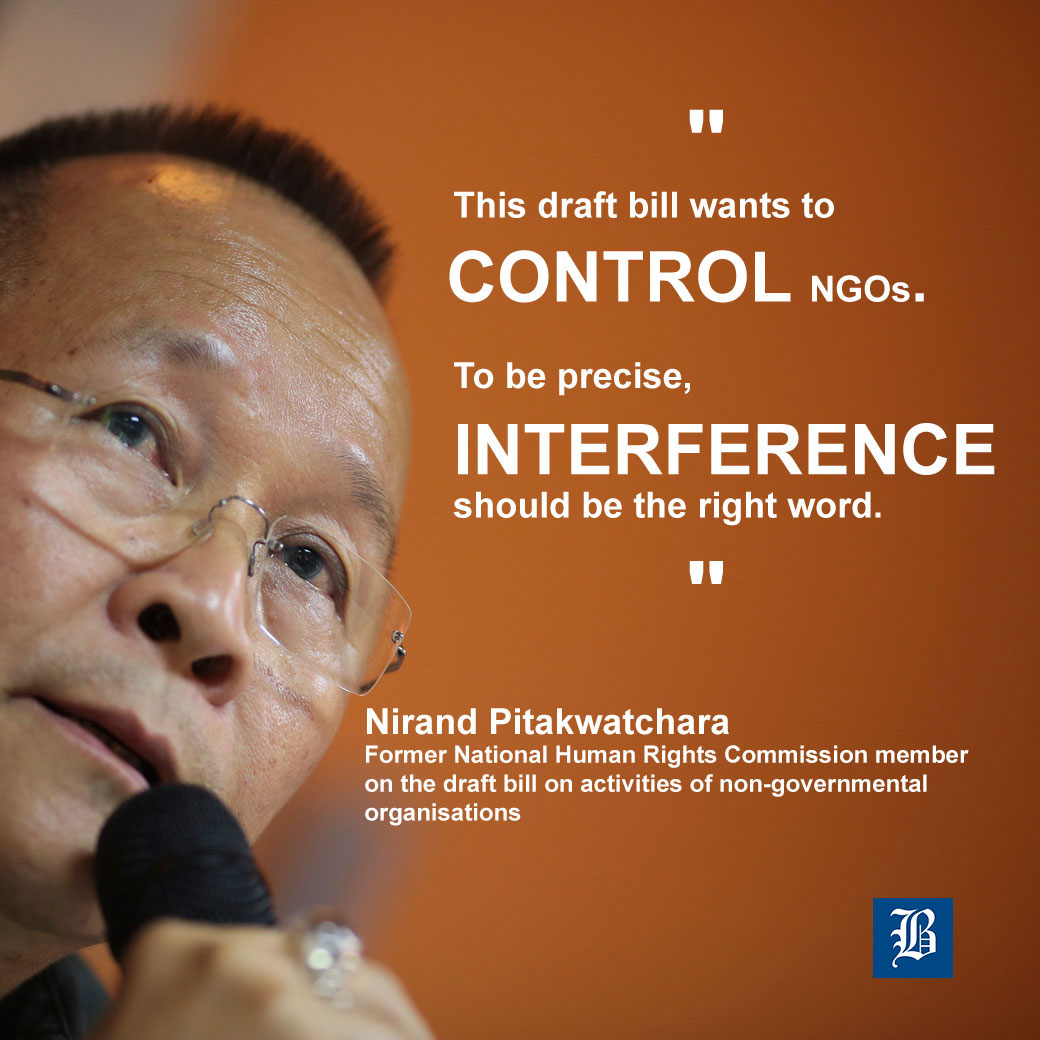 Dr Nirand said the government should work with civic groups to promote the kind of democracy that respects different opinions. "Neither the government nor NGOs always do the right things. But there is a process for them to sort out their differences in line with the democratic principle," he said.

"This government looks at NGOs in a negative light as they are seen as opposition entities," he added.

Despite anger from civic groups, the draft received support from people in an opinion poll conducted by the National Institute of Development Administration released on Jan 16.

According to the survey, 52% strongly agreed that NGOs should reveal their sources of funding and 34% agreed that their activities might affect national security.

The NGOs said in the statement that they did not oppose attempts to look into their transparency; the problem lay in the bill's real intention — to regulate them. It had a hidden agenda, Ms Anusorn said.

Dr Nirand told CU Radio that funding of civic groups was already subject to probes by the state and among themselves, and they were already required to keep the goverment informed of their activities.

Dr Nirand warned that the draft, if it becomes law, would deepen rifts in the country since opposing views by civic groups would not be tolerated by the government. It would damage the country in the eyes of the international community, who would see Thailand as a country that did not respect human rights principles, he added.

"No investors want to invest in a country that does not respect human rights," he said.

After a public forum to seek opinions on the draft, the Social Development and Human Security Ministry will send the results to the cabinet for a final decision. If approved, it would be forwarded to Parliament for deliberation.

Ms Anusorn said NGOs were also preparing for a campaign to convince lawmakers to shoot down the draft.

"We will lobby the opposition and government camps in Parliament to oppose it," she said, although the campaigners admitted the goverment would fight to see it become law.

"The government will do everything it can to control civic groups," the activist added.

The Ministry of Public Health will press ahead with a controversial amendment that would make possession of more than one methamphetamine pill dealing in illegal narcotics.

SURAT THANI: The search resumed on Wednesday for a 35-year-old German tourist who jumped into the sea near Koh Phangan on Tuesday night, but he has not been found.