Give way to elephants, or go to jail
Thailand
General

Give way to elephants, or go to jail

One of 35 signs warning motorists of wild elephants crossing the road, posted along a 15km section of Highway 1399 in Muang district, Kanchanaburi. (Photo: Piyarat Chongcharoen)

KANCHANABURI: Motorists using a highway also favoured by wild elephants in Muang district have been warned they face up to 10 years' imprisonment and a million baht fine if they hit and injure one of the giant animals, and wildlife authorities will strictly enforce the penalties.

The warning follows a number of recent collisions resulting in the severe injury or death of wild elephants.

Paitoon Inthabut, chief of Salak Phra Wildlife Sanctuary, said on Thursday that 35 signs warning of wild elephants crossing the road had been posted along the 15-kilometre section of Highway 1399 between tambon Wang Dong and tambon Chong Sadao.

Elephants regularly crossed the road when moving from one feeding area to another.

The warning signs also set a speed limit of 60 kilometres per hour and warned of imprisonment and fines on motorists who hit a wild elephant.

With so many warnings posted, motorists could not make the excuse they were unaware of the presence of wild elephants along that section of highway or the legal penalties for hitting one, Mr Paitoon said.

Even so, there were several cases of vehicles crashing into wild elephants.

The Ministry of Natural Resources and Environment had ordered the wildlife sanctuary office to intensify measures to protect wildlife, he said.

"If motorists break the speed limit and hit a wild elephant, they will be prosecuted," Mr Paitoon said.

He said the Wildlife Conservation and Protection Act provided for a prison term of up to 10 years and/or fine of one million baht if a wild elephant was killed or injured by a motor vehicle, whether intentionally or not

Under the same act, the offending motorist would also have to pay hundreds of thousands of baht in compensation for each harmed elephant.

In the case of a hit-and-run, a driver who failed to assist an injured wild elephant was liable to a prison term of up to three months and/or fine of 2,000-10,000 baht under the Land Traffic Act, Mr Paitoon said.

The law would be strictly enforced.

Recently, on Jan 9 a pickup truck hit a wild elephant on the highway in tambon Wang Dong. The man driving the vehicle was unscathed, but his two women passengers were hurt. The elephant, a mature bull aged about 30 years, was very seriously injured and was found dead in the jungle two days later.

And on Feb 1 another elephant was hit by a van on the same highway, also in Wang Dong.

Officials found the tracks of an elephant showing an injured left hind leg leaving the area and were still looking to find and treat it. 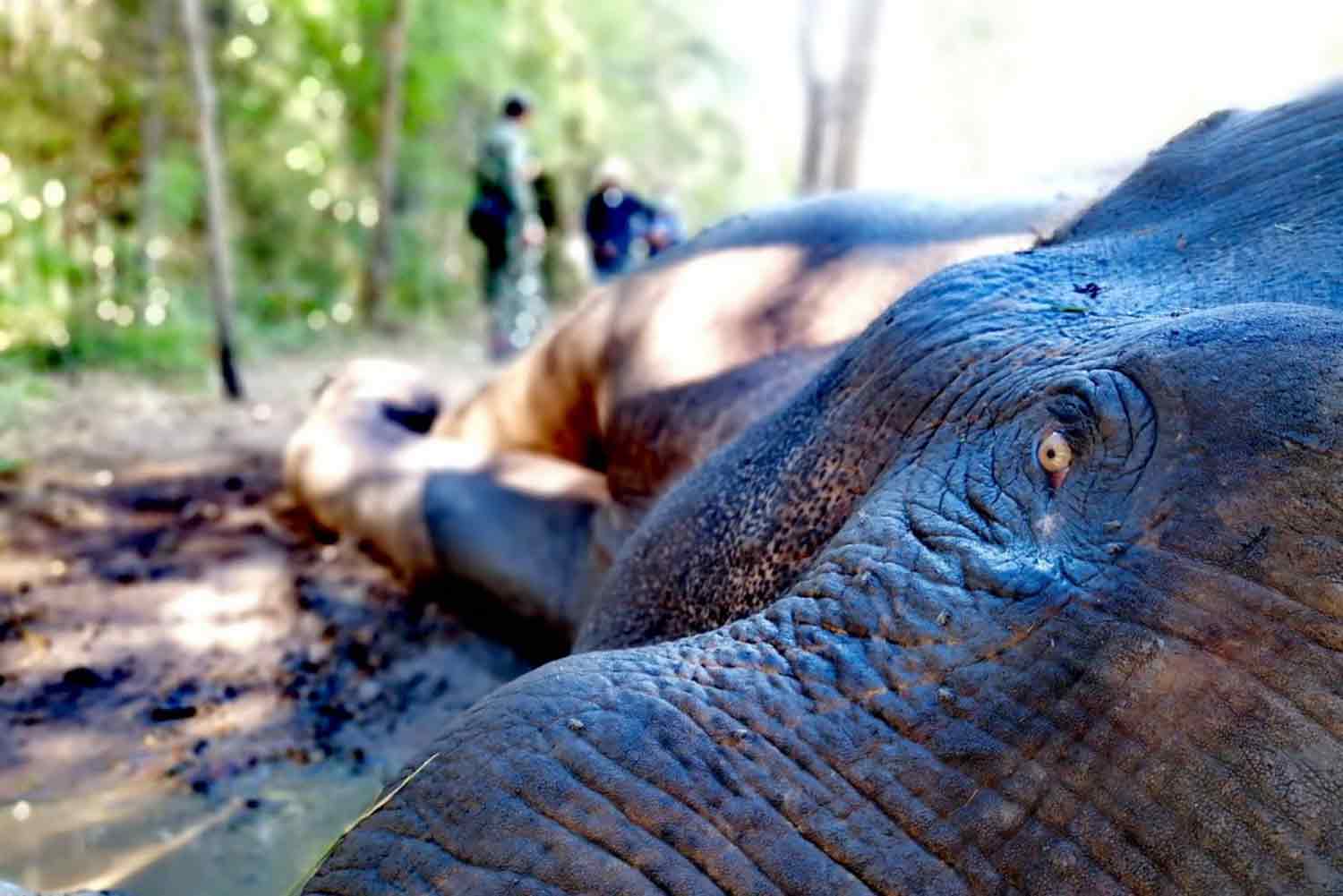 This wild bull elephant, aged about 30 years, was found dead in the jungle on Jan 11, about two kilometres from where it was hit by a pickup truck on Highway 1399 in Muang district, Kanchanaburi, two days earlier. (Photo: Piyarat Chongcharoen)