No lockdowns yet despite Covid fears

A boy gets swabbed for a Covid-19 test at Poonsap community in Bangkok's Sai Mai district on Monday. Out of the 183 people tested, four were infected. (Photo: Apichit Jinakul)

The Public Health Ministry has raised its Covid-19 alert to Level 4 following a sharp increase in Omicron variant infections nationwide.

That said, the Centre for Covid-19 Situation Administration (CCSA) indicated that no lockdowns will be brought back to bring the current outbreak to an end.

Ministry spokesman, Rungrueng Kijphati, posted on Facebook on Monday that a meeting of the ministry's Emergency Operation Centre (EOC) decided that the alert level will be raised nationwide and containment measures stepped up in high-risk areas.

The move came as the number of new infections, severe cases and deaths continue to rise, with authorities noting an increasing risk of infection among family members and close acquaintances as a result of taking part in collective activities such as dining out, playing sports, and attending wedding and funeral ceremonies, Dr Rungrueng said.

Individuals from at-risk groups -- including the elderly, those with underlying health conditions and the unvaccinated -- continue to account for most Covid-related deaths, he added.

The ministry had raised the alert to Level 4 in some red-zone provinces early last month, when the situation was less severe than now. With the latest announcement, the alert will now apply to all provinces nationwide.

Kiattiphum Wongrajit, permanent secretary for public health, said that the Public Health Ministry wanted to remind the public of the threat posed by the virus. 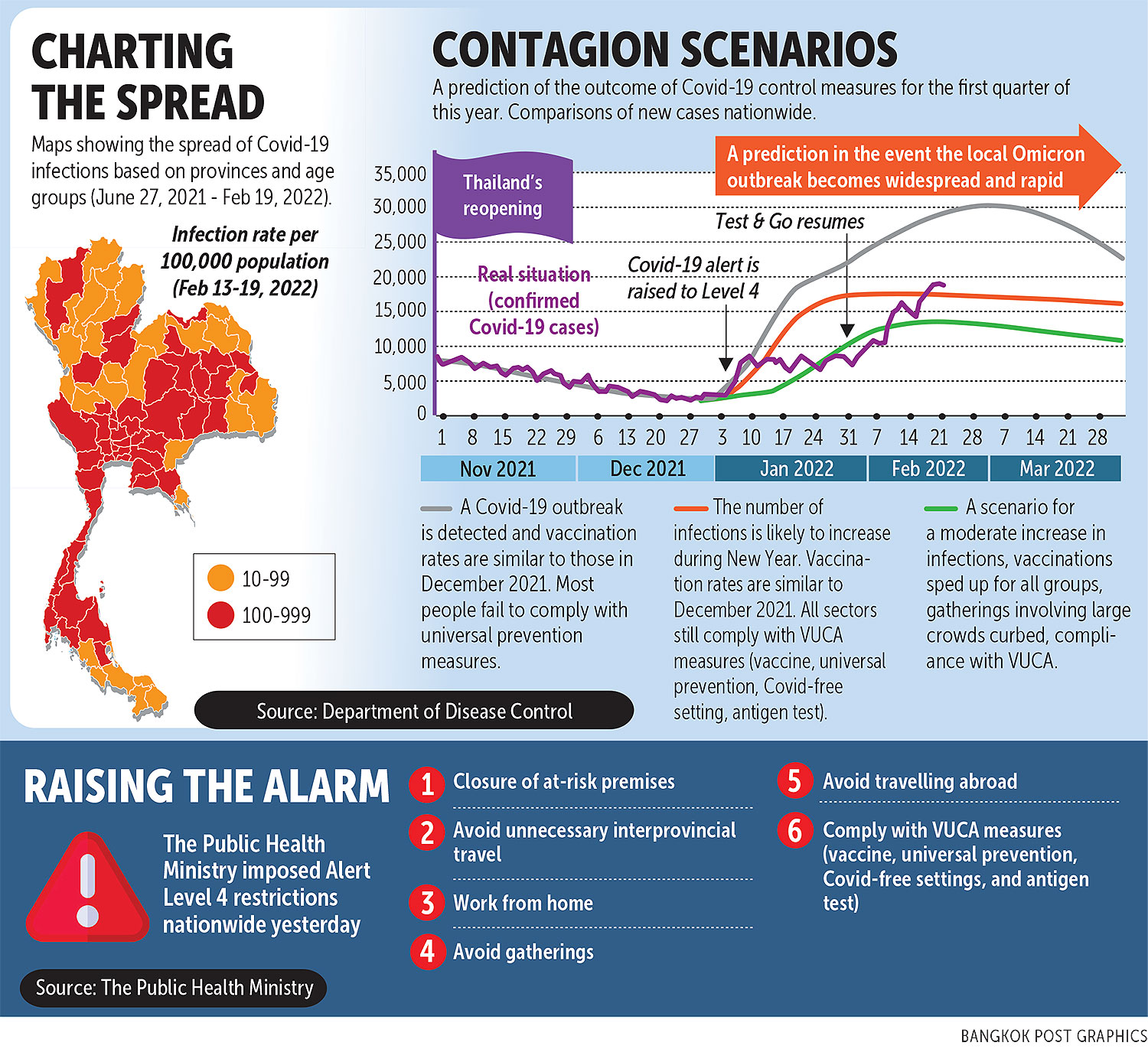 "We had previously announced [the Level-4 alert], but the public may have forgotten the warning," Dr Kiattiphum said, adding that if people fail to comply with precautions and the outbreak does not slow, then strict curbs may have to be brought back.

Jakkarat Pittayawong-anont, director of the Department of Disease Control's epidemiology division, said that throughout the country, infections have been increasing across all groups, particularly among working-age people and children.

He said that the 18 provinces promoted for tourism must be closely monitored. Of them, eight provinces -- Bangkok, Chon Buri, Phuket, Kanchanaburi, Krabi, Phangnga, Nonthaburi, and Pathum Thani -- have seen case numbers fluctuate, though the trend is still rising.

CCSA spokeswoman, Apisamai Srirangson, on Monday said from Wednesday, the CCSA will focus on the number of deaths and severe cases, rather than the spike in new cases, she said.

Wednesday's meeting will consider whether the public health system still has the capacity to deal with the situation and look at measures to speed up economic recovery.

"While the CCSA is unlikely to bring back lockdowns, Thailand still cannot afford to relax virus curbs in the same way as other countries have done. We have to come up with our own approach," Dr Apisamai said.

She was also trying to allay concerns about the rumoured suspension of the Test & Go scheme, saying the public health system is still sufficiently equipped to handle foreign arrivals who test positive.

When hospital personnel are infected, they will have to be quarantined, which compounds the shortage of personnel looking after patients, she said.

Thailand logged 18,883 new cases and 32 more Covid-19 fatalities over the past 24 hours, the Public Health Ministry reported on Monday.