The country reported 22,311 new Covid-19 cases during the previous 24 hours, the second consecutive day of declines from the peak of 25,615 on Saturday, the Public Health Ministry announced on Monday morning. There were 42 more coronavirus-related fatalities.

On Sunday morning, the government announced the same number of deaths - 42 - but a significantly higher 24,719 new cases.

Apisamai Srirangson, spokeswoman for the Centre for Covid-19 Situation Administration, said in Monday's afternoon briefing that the 42 new fatalities were between the ages of 2 and 102 years old.

“Six of them had cancer, four had obesity, 11 had kidney disease and one was bed-ridden,” she said. “Nine cases were in Bangkok and three of them were unvaccinated. Of the 42 new fatalities, 26 or 62% were unvaccinated and the rest had not received a booster shot.”

Bangkok had nine new deaths while there were four more fatalities in the adjacent provinces of Pathum Thani (2) and Nakhon Pathom (2).

Other central plain provinces further from the capital recorded nine more deaths – two in Suphan Buri and one each in Phetchaburi, Chachoengsao, Trat, Sa Kaeo, Ang Thong, Saraburi and Rayong.

The South reported 13 more deaths – four in Chumphon, two each in Krabi and Nakhon Si Thammarat and one each in Phuket, Trang, Narathiwat, Songkhla and Surat Thani.

The North saw one new fatality in Uttaradit. 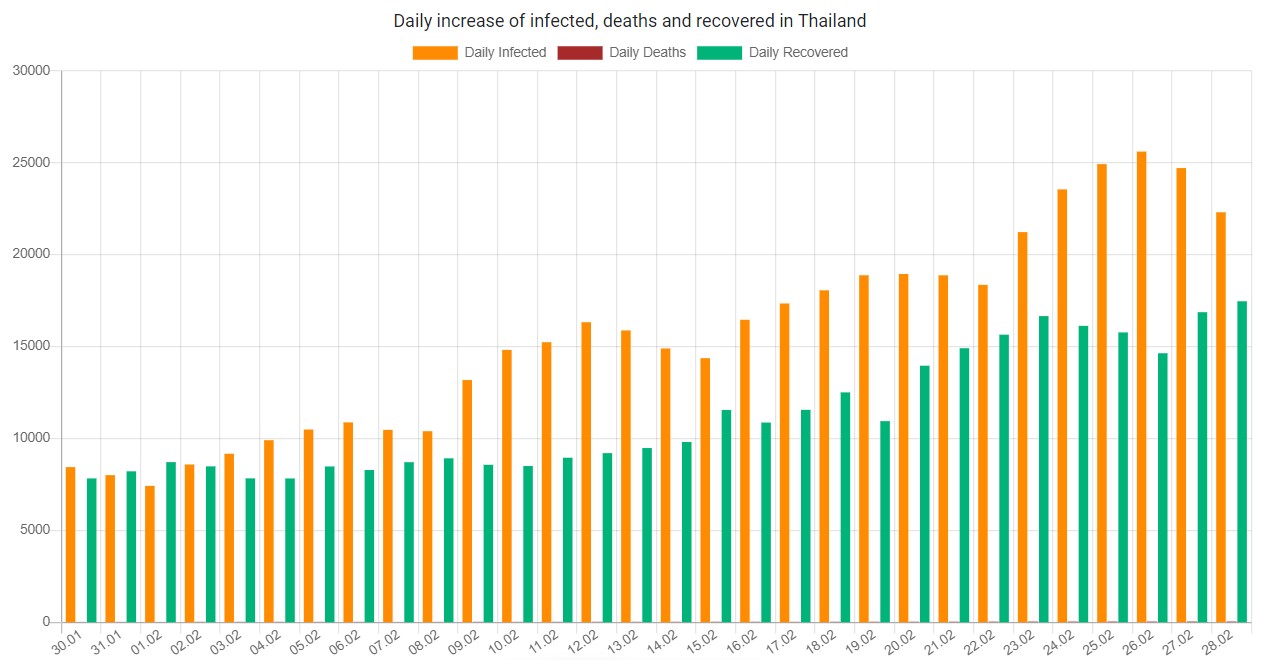 There were 22,148 new infections in the general population, 27 among prison inmates and 136 imported cases.

Of the local Covid-19 infections, 21,958 were confirmed at hospitals and 190 via mass testing.

The figures did not include 21,497 positive results from antigen tests over the past 24 hours.

The 136 imported cases were from 35 countries and included 33 from Cambodia, 16 from Russia, 15 from Myanmar and 10 from Germany.

On Sunday 213,645 people received Covid-19 treatment at hospitals, including 980 seriously ill patients with lung inflammation and 280 dependent on ventilators.

“Of all the patients, 83,479 were admitted to conventional hospitals which informed the Department of Disease Control that as many as 82,499 or 98% were green-coded patients who have mild symptoms or pose no risks,” Dr Apisamai said.

She asked patients with mild or no symptoms to treat themselves at home to save hospital beds for critically ill and vulnerable patients.

The 24-hour period also saw 17,470 Covid-19 patients discharged from hospitals after recovering from the coronavirus.

The death toll stood at 22,933 since the beginning of the pandemic, including 1,235 so far this year.

The accumulated death toll stood at 22,933 since the beginning of the pandemic, including 1,235 so far this year.