RT-PCR on arrival continues from April

Foreign travellers to Thailand will not be required to take a pre-travel Covid-19 test starting from April 1, but testing on arrival will continue.

The revised entry rules were among several measures approved by the Centre for Covid-19 Situation Administration (CCSA) on Friday.

CCSA spokesman Dr Taweesilp Visanuyothin said the requirement for pre-travel RT-PCR tests would end for all visitors, whether arriving by air, land or sea under the Test & Go, Sandbox or quarantine programmes.

People who enter the country through one of the programmes will be given an RT-PCR test on arrival. They also will be required to perform an antigen self-test on day 5 after arrival and be monitored at their hotel.

Sandbox visitors must remain in their designated area for five days. Visitors in the quarantine scheme, including people caught entering the country unlawfully, will be kept in isolation for five days and have an RT-PCR test on the fourth or fifth day after arrival.

The CCSA will continue to require visitors to have Covid-19 insurance coverage of at least US$20,000 (667,000 baht) but likely will reduce the amount later, Dr Taweesilp said.

Also from April 1, visitors will be able to arrive by land through Satun province in the South, in addition to the entry points of Nong Khai, Udon Thani and Songkhla.

Arrivals by sea will be allowed through Surat Thani ports, in addition to currently allowed entries at Phuket and Chon Buri. 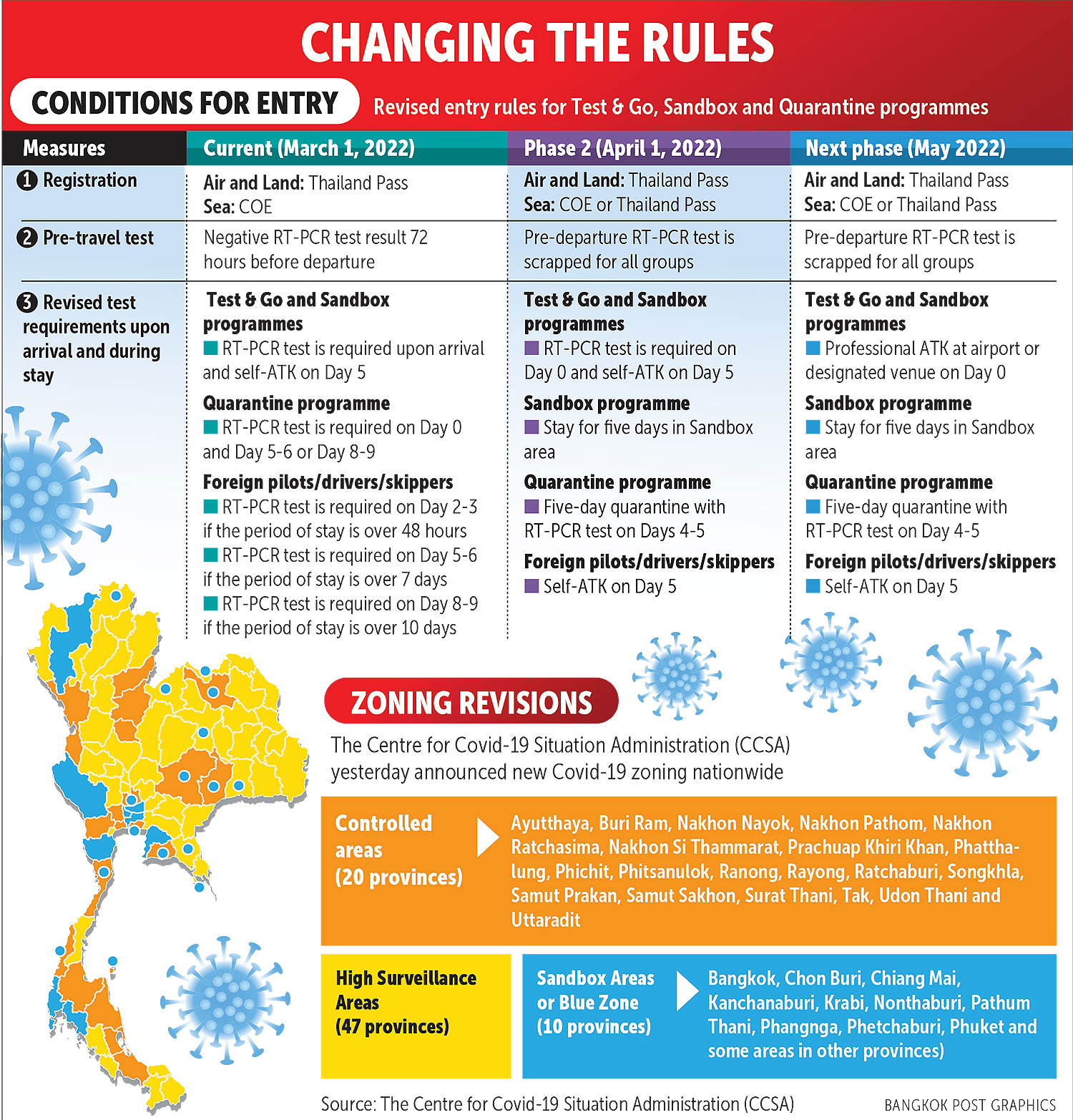 The CCSA hopes to expand the reopening of land borders with neighbouring countries in May if the Covid-19 situation improves, depending on the readiness of each province, Dr Taweesilp said.

The number of provinces designated as blue zones and promoted for tourism was increased from eight to 10, with these including Chiang Mai and Phetchaburi provinces, Dr Taweesilp said.

There are also certain districts within 18 provinces that have been designated as blue zones, he said.

However, night entertainment venues nationwide remain closed, although they are still allowed to operate as restaurants under Covid-free setting precautions, Dr Taweesilp said.

The CCSA also extended enforcement of the emergency decree imposed to curb Covid-19, set to expire on March 31, until the end of May, he said.