Daily cases hit 25,164, the fifth highest since the pandemic began

After four days of declines, daily Covid-19 cases bounced back above 25,000, the Public Health Ministry announced on Wednesday, with the confirmed new caseload reaching 25,164. There were 80 more coronavirus-related fatalities.

The 24-hour caseload, the fifth highest since the start of the pandemic, was 3,782 higher than Tuesday morning's figures, while deaths declined by three.

Wednesday's Covid report did not include 26,812 positive results from antigen tests over the previous 24 hours, which would raise the total to 51,976 if they were all confirmed.

The latest 80 fatalities were between the ages of two months and 95 years and included one foreigner, a Vietnamese.

Other central plain provinces further from the capital recorded 22 deaths - three each in Chon Buri and Lop Buri, two each in Nakhon Sawan, Saraburi, Ratchaburi, Prachin Buri and Sa Kaeo and one each in Nakhon Nayok, Trat, Chai Nat, Sing Buri, Suphan Buri and Ang Thong.

The Northeast had 11 fatalities - two each in Khon Kaen, Maha Sarakham and Nong Khai and one each in Surin, Buri Ram, Nong Bua Lam Phu, Udon Thani and Kalasin.

The South reported 16 deaths - four in Yala, three in Surat Thani, two each in Ranong and Phuket and one each in Nakhon Si Thammarat, Trang, Songkhla, Pattani and Narathiwat.

The North saw nine more coronavirus-related fatalities - three each in Phetchabun and Chiang Mai, two in Phichit and one in Sukhothai. 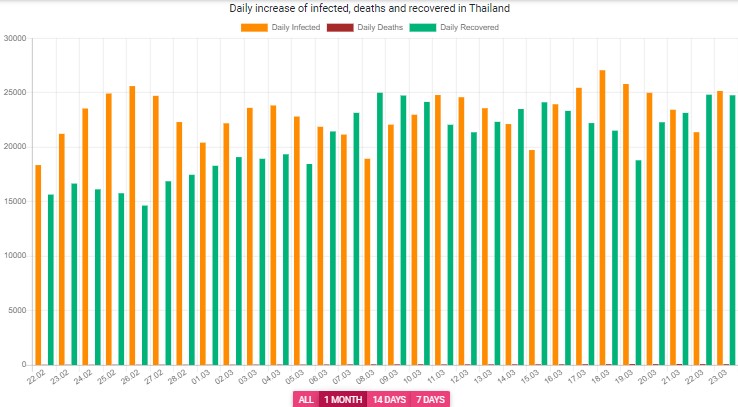 Just 48 of the 25,164 new infections were round in arrivals from other countries. The remainder - including 43 among prison inmates - were all domestic transmissions.

Of the new cases in the general population, 24,934 were confirmed at hospitals and 139 via mass testing.

The 48 imported cases came from 18 countries and included 17 from Turkey, four each from Singapore and Germany, three each from the United Kingdom and Malaysia and two each from Egypt, the United Arab Emirates, Pakistan and Australia.

The 24-hour period also saw 24,770 Covid-19 patients discharged from hospitals after recovering from the coronavirus.

The death toll stood at 24,497 since the beginning of the pandemic, including 2,799 so far this year.