This compared with the 41 coronavirus-related fatalities and 6,463 new cases reported on Friday morning.

The new case numbers did not include 6,637 positive results from antigen tests over the previous 24 hours, which would raise the total to 12,014.

Of those in hospitals, 1,018 were seriously ill patients with lung inflammation (down from 1,037 previous day) and 493 were dependent on ventilators (down from 510).

Of the seriously ill patients, Bangkok had the most cases at 103, followed by 59 in Ubon Ratchathani, 56 in Suphan Buri, 53 in Nakhon Ratchasima and 38 in Udon Thani. 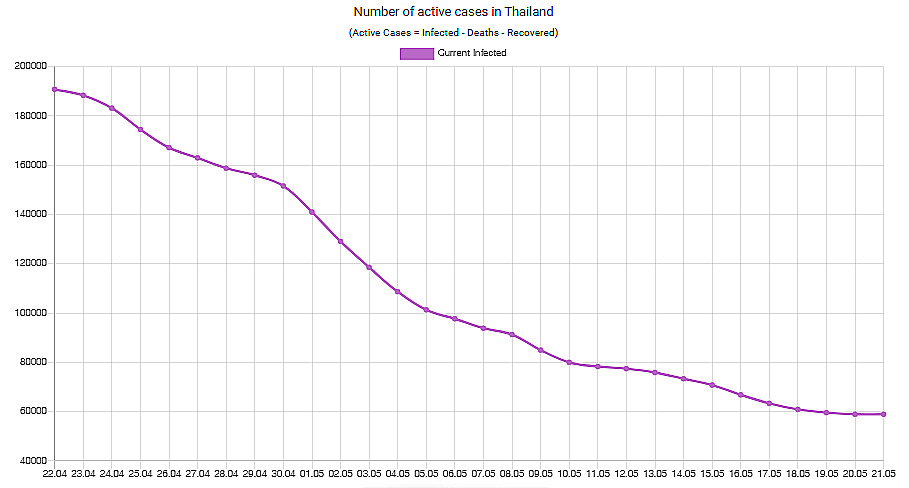 According to the Centre for Covid-19 Situation Administration (CCSA), the 37 new coronavirus-related fatalities were aged from 18 to 99 years with the average age of 76. They were 23 men and 14 women, all Thais.

Bangkok reported four more deaths, and there were two in the adjacent provinces of Samut Prakan and Pathum Thani.

Other provinces in the Central Plains saw 12 new deaths – two each in Ratchaburi, Uthai Thani, Ayutthaya and Rayong and one each in Chachoengsao, Trat, Sa Kaeo and Saraburi.

The Northeast logged 12 more fatalities – three in Ubon Ratchathani, two each in Roi Et and Surin and one each in Loei, Nakhon Ratchasima, Nong Bua Lam Phu, Si Sa Ket and Nakhon Phanom.

The North saw three deaths – two in Chiang Mai and one in Kamphaeng Phet.

The South had four deaths – three in Nakhon Si Thammarat and one in Songkhla.

The new infections announced Saturday comprised 5,361 in the general population, 14 among prison inmates and two in arrivals from other countries.

Of the new infections in the general population, 5,354 were confirmed at hospitals and seven via mass testing.

The two imported cases were from South Korea and Australia.

The accumulated death toll stood at 29,715 since the beginning of the pandemic, including 8,017 so far this year.

Health and administrative officials nationwide have been told to prepare for rising numbers of Covid-19 cases.