A young student has her image recorded while arriving at Pimarnvit School in Narathiwat province on Friday as in-person classes in the country resumed nationwide for a new term, after years of disruption due to the Covid-19 pandemic. (AFP photo)

Thailand's daily coronavirus-releated deaths dropped from 37 to 31, the fewest since Feb 20, the Public Health Ministry said on Sunday.

As of Saturday, a total of 55,792 people were receiving Covid-19 treatment, including 20,487 in hospitals. The remainder were in hospitel facilities (5,504) or in home/community isolation (29,526), according to the daily update posted by the Department of Disease Control.

Of those in hospital, 1,031 were seriously ill patients with lung inflammation and 509 dependent on ventilators.

Of the seriously ill patients, Bangkok had the most cases at 103, followed by 62 in Ubon Ratchathani, 55 in Suphan Buri, 53 in Nakhon Ratchasima and 41 in Chaiyaphum.

Over the previous 24 hours, 7,391 Covid-19 patients were discharged from hospitals after recovering from the coronavirus.

The Centre for Covid-19 Situation Administration said just five of the 4,739 new infections confirmed by PCR test on Saturday were in new arrivals from other countries - two from Sweden and one each from Denmark, Japan and Israel.
Bangkok recorded almost a third of daily cases - 1,465 - followed by 164 in Surin, 157 in Buri Ram, 156 in Ubon Ratchathani and 142 in Khon Kaen. 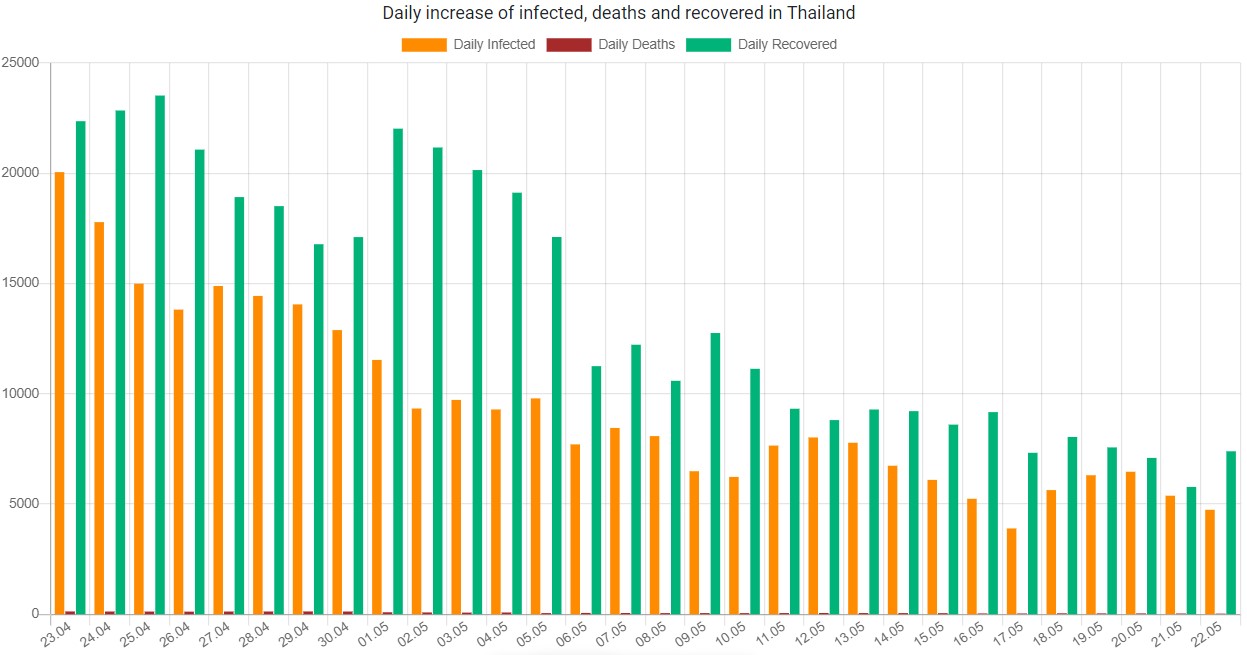 The North reported seven deaths, led by two in Nan and one each in Lamphun, Lampang, Chiang Mai, Sukhothai and Kamphaeng Phet.

The Northeast saw 11 new fatalities — five in Nakhon Ratchasima, two in Roi Et, and one each in Khon Kaen, Si Sa Ket, Sakon Nakhon and Yasothon.

The South had two deaths in Nakhon Si Thammarat and Pattani.

75% of Thais have at least two shots

Vaccinations continued to progress, with 136.54 million doses administered as of Saturday. The government said 81.4% of the population has now received at least one dose of the vaccine, 75.2% at least two shots and 39.7% at least one booster shot.

The accumulated death toll stood at 29,746 since the beginning of the pandemic, including 8,048 so far this year. 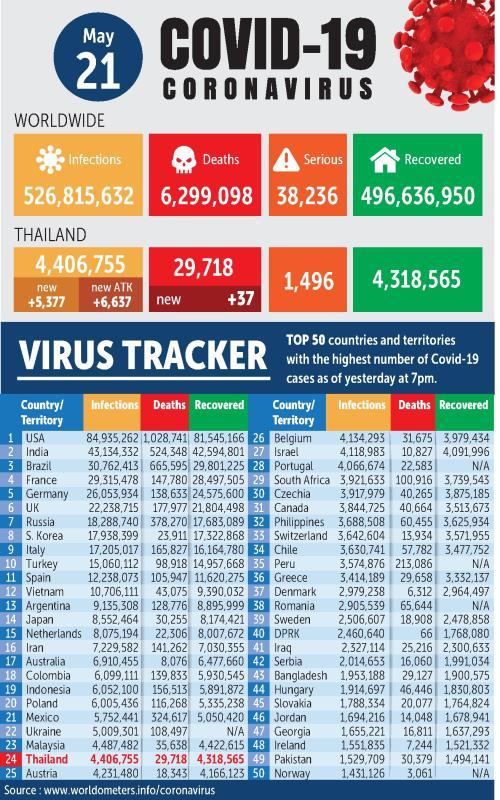