A woman uses a treadmill during a demonstration for the Recovery Care Clinic's 'Realize & Personalized' programme for people with long Covid-19, a potentially debilitating chronic form of the disease, at Thainakarin Hospital in Bangkok on Thursday. (Photo: Somchai Poomlard)

This compared with 37 Covid-19 fatalities and 4,924 new cases registered on Wednesday and 33 deaths and 5,013 cases on Tuesday.

Thursday’s figures did not include 6,380 positive results from antigen tests over the past 24 hours. This would raise the total to 11,217.

Of those in hospital, 979 were seriously ill patients with lung inflammation (down from 995) and 493 dependent on ventilators (down from 503).

Of the seriously ill patients, Bangkok had the most cases at 102, followed by 65 in Ubon Ratchathani, 48 each in Nakhon Ratchasima and Udon Thani and 40 in Samut Prakan.

According to the CCSA, the 29 people who died were aged from 21 to 94 years and included one foroeigner, from Myanmar.

Bangkok logged two more deaths and there were two more in the adjacent province of Nakhon Pathom.

Other central plains provinces further from the capital had six deaths - five in Lop Buri and one in Rayong.

The South had no additional deaths. 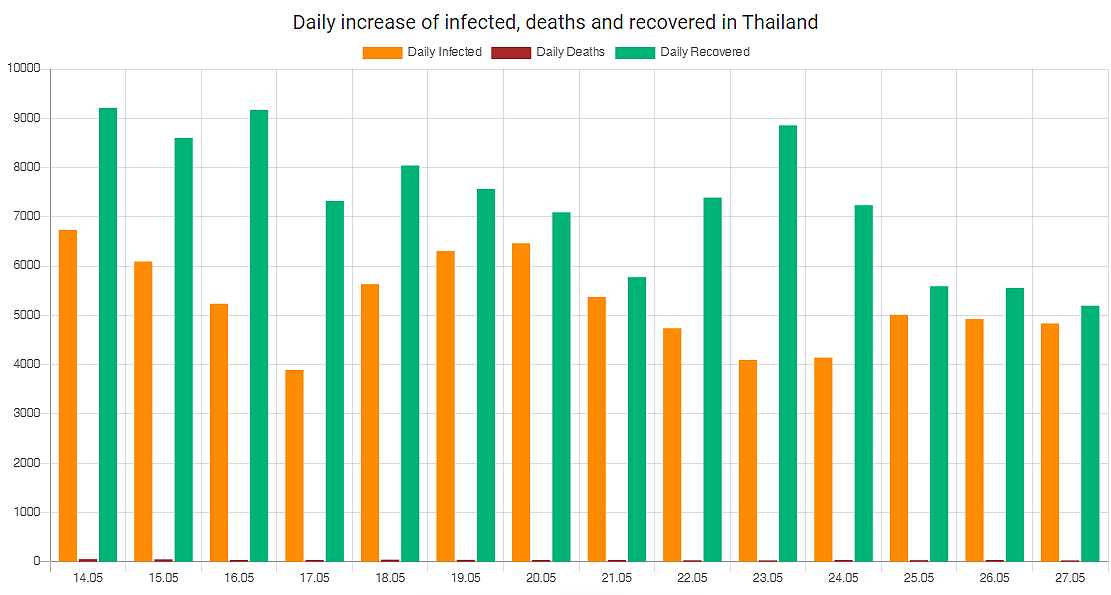 Among 4,837 new cases over the past 24 hours, there were 4,829 cases in the general population, four among prison inmates and four imported cases.

Of the new infections in the general population, 4,821 were confirmed at hospitals and eight via mass testing.

The accumulated death toll stood at 29,910 since the beginning of the pandemic, including 8,212 so far this year.