This compared with the 29 coronavirus-related fatalities and 4,837 new cases reported on Friday morning.

The new case numbers did not include positive results from antigen tests over the previous 24 hours.

The new infections announced Saturday comprised 4,476 in the general population and 12 among prison inmates, and there were no imported cases.

Of those in hospital, 939 were seriously ill patients with lung inflammation (down from 979) and 461 were dependent on ventilators (down from 493).

Of the seriously ill patients, Bangkok had the most cases at 97, followed by 49 in Udon Thani, 46 in Nakhon Ratchasima, 39 in Samut Prakan, 35 in Nakhon Sawan and 33 in Ubon Ratchathani.

The Centre for Covid-19 Situation Administration (CCSA) reported that the 38 people who died were aged from 4 to 101 years. They were 23 men and 15 women, all Thais.

Bangkok saw no new deaths, and there was one in the adjacent province of Samut Prakan.

Other provinces in the Central Plains had 13 fatalities – two each in Chon Buri, Prachin Buri, Ratchaburi and Uthai Thani, and one each in Nakhon Sawan, Samut Songkhram, Rayong, Chachoengsao and Sa Kaeo.

The Northeast logged 15 deaths – four in Si Sa Ket, three in Yasothon, two each in Roi Et and Maha Sarakham and one each in Nakhon Ratchasima, Surin, Ubon Ratchathani and Khon Kaen.

The North reported seven coronavirus-related fatalities – two in Phrae and one each in Lamphun, Lampang, Phayao, Phitsanulok and Phetchabun.

The South had two new deaths – one each in Surat Thani and Songkhla. 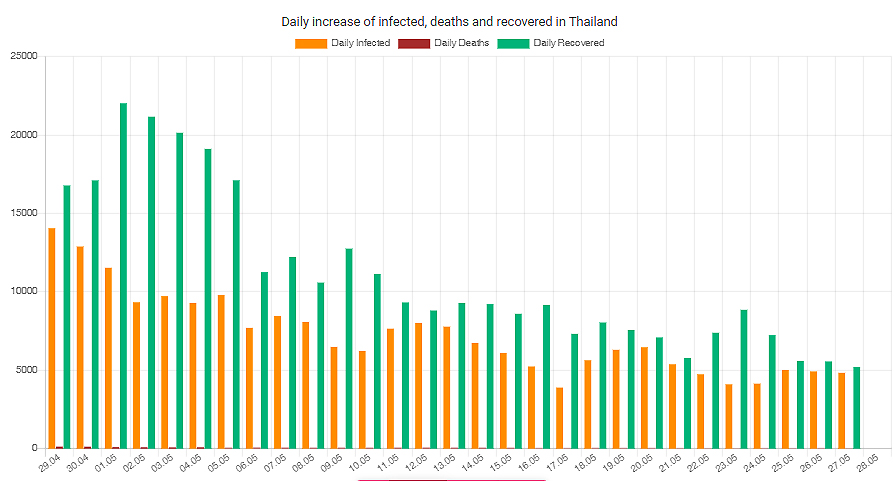 Of the new infections in the general population, 4,468 were confirmed at hospitals and eight via mass testing.

Vaccinations continued to progress, with 137.27 million doses administered as of Friday. 81.5% of the population have now received at least one dose of the vaccine, 75.5% at least two shots and 40.3% at least one booster shot, according to the CCSA.

The accumulated death toll stood at 29,948 since the beginning of the pandemic, including 8,250 so far this year.