Thais and tourists flock to the famous Chatuchak weekend market in Bangkok on Sunday after the easing of Covid-19 restrictions, including the lifting of mask wearing mandate. (Photo: Apichit Jinakul)

This compared with 2,236 new cases and 16 coronavirus-related fatalities reported on Saturday morning.

The country has registered more than 2,000 new cases every day since Wednesday. Saturday's figures were the second highest during the period after the 2,387 found on Wednesday.

Saturday’s figures, which were reported on Sunday, did not include 3,521 positive results from antigen tests over the past 24 hours. This would raise the total to 5,899.

As of Saturday, a total of 23,313 people were receiving Covid-19 treatment, including 10,479 in hospitals. The remainder included those in hospitel facilities (1,136) and in home/community isolation (11,654), according to the daily update posted by the Department of Disease Control.

Of those in hospital, 601 were seriously ill patients with lung inflammation and 290 dependent on ventilators.

All but two of the new infections were transmitted inside the country's borders.

On Saturday, 1,834 Covid-19 patients were discharged from hospitals after recovering from the coronavirus - also marking the fifth consecutive day that new infections outpaced recoveries. 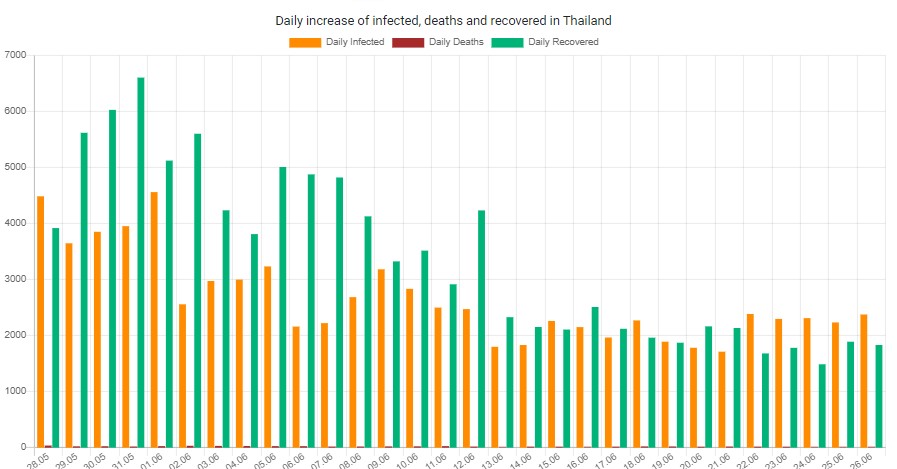 According to the Centre for Covid-19 Situation Administration, the 17 people who died were aged from 46 to 95 with the average age of 62. One was from China and the rest were Thais.

No new fatalities were recorded in Bangkok, with a single death in the adjacent province of Nakhon Pathom.

Other central plains provinces further from the capital had eight deaths — two in Suphan Buri, and one each in Nakhon Sawan, Uthai Thani, Nakhon Nayok, Chachoengsao, Rayong and Chonburi.

The Northeast saw four new fatalities — two in Khon Kaen and one each in Yasothon and Nakhon Ratchasima.

The South had one death in Pattani.

Vaccinations continued to progress, with 139.54 million doses administered as of Saturday. The government said 81.9% of the population has now received at least one dose of the vaccine, 76.4% at least two shots and 42.4% at least one booster shot.

The accumulated death toll stood at 30,592 since the beginning of the pandemic, including 8,894 so far this year. 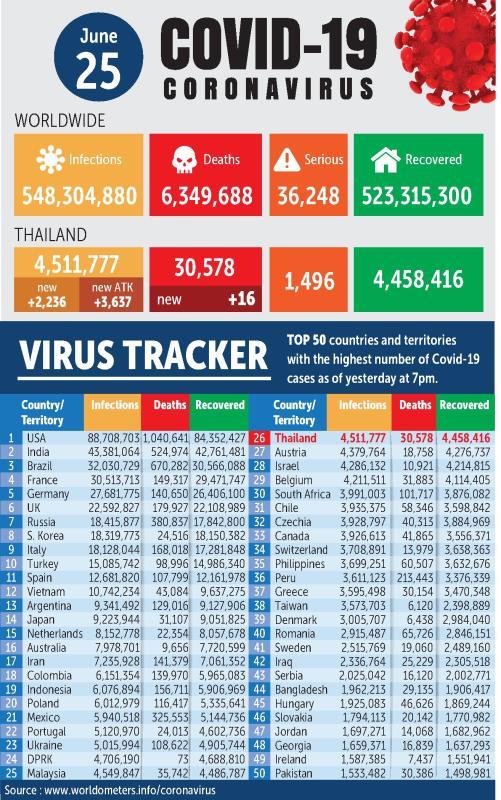