About 1,000 people gather to receive rice and dried foods during a merit-making ceremony held by Ruamkusol Foundation in Samut Prakan province on Aug 3, 2022. (Photo: Somchai Poomlard)

There were 35 more Covid-19 deaths and 2,140 new cases admitted to hospitals on Friday, the Ministry of Public Health reported on Saturday.

This compared with 33 coronavirus-related fatalities and 2,455 patients on Thursday, as reported on Friday.

Of those in hospitals, 912 were seriously ill patients with lung inflammation (down from 920) and 482 were dependent on ventilators (up from 477).

According to the Centre for Covid-19 Situation Administration (CCSA), the 35 new deaths were aged from 23 to 97 years old with an average age of 70. There were 19 men and 16 women, all Thais.

Bangkok reported four new fatalities, and there were three more deaths in the adjacent provinces - two in Samut Prakan and one in and Samut Sakhon.

Other provinces in the Central Plains saw 10 new deaths – five in Saraburi,  two in Nakhon Sawan and one each in Chon Buri, Rayong and Nakhon Nayok.

The Northeast had five new deaths – two in Khon Kaen and one each in Nong Khai, Udon Thani and Surin.

The North logged eight fatalities – four in Chiang Mai, two in Lampang and one each in Tak and Phrae.

The South reported five new deaths – two each in Phuket and Pattani and one in Surat Thani. 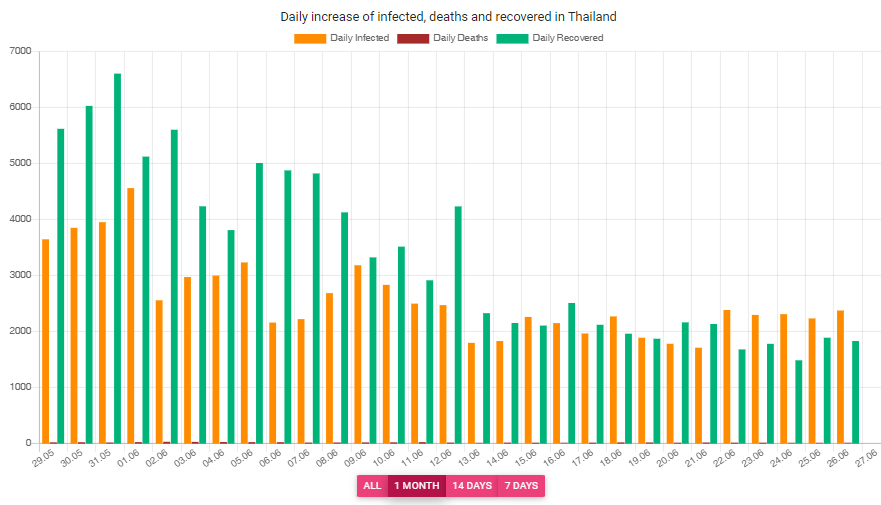 Of the 2,140 new cases over the 24 hours, there were 2,132 cases in the general population, seven among prison inmates and one imported case.

Vaccinations continued to progress, with 142.16 million doses administered as of Friday.

The accumulated death toll stood at 31,663 since the beginning of the pandemic, including 10,100 so far this year.