People getting vaccinated against Covid-19 at the Bang Sue Central Vaccination Centre in Bangkok on Aug 21, 2022. Officials have decided the centre can stay open until Sept 30, in line with Public Health Ministry plans. (Photo: Apichart Jinakul)

This compared with 1,106 patients and 17 deaths reported on Saturday.

There were 1,092 local cases and one imported case.

The 24-hour period saw 2,101 patients discharged from hospitals after recovering.

As of Saturday, a total of 12,766 people were receiving Covid-19 treatment, including 7,369 in hospitals. The remainder included 107 in hospitel facilities and 5,280 in home/community isolation, according to the daily update posted by the Department of Disease Control.

Of those in hospital, 681 were seriously ill patients with lung inflammation and 343 dependent on ventilators.

According to the Centre for Covid-19 Situation Administration, the 19 people who died were aged from 46 to 97 with the average age of 79. All were Thais.

Bangkok logged no fatalities but there were two in adjacent provinces — Nakhon Pathom and Nonthaburi.

Other central plains provinces further from the capital had 13 deaths — seven in Prachuap Khiri Khan, two in Prachin Buri, and one each in Chon Buri, Rayong, Phetchaburi and Suphan Buri.

The North reported one death in Chiang Mai.

The Northeast saw three new fatalities — two in Maha Sarakham and one in Sakhon Nakhon.

Vaccinations continued to progress, with 143.00 million doses administered as of Saturday. The government said 82.4% of the population has now received at least one dose of the vaccine, 77.3% at least two shots and 45.9% at least one booster shot.

The accumulated death toll stood at 32,539 since the beginning of the pandemic, including 10,841 so far this year. 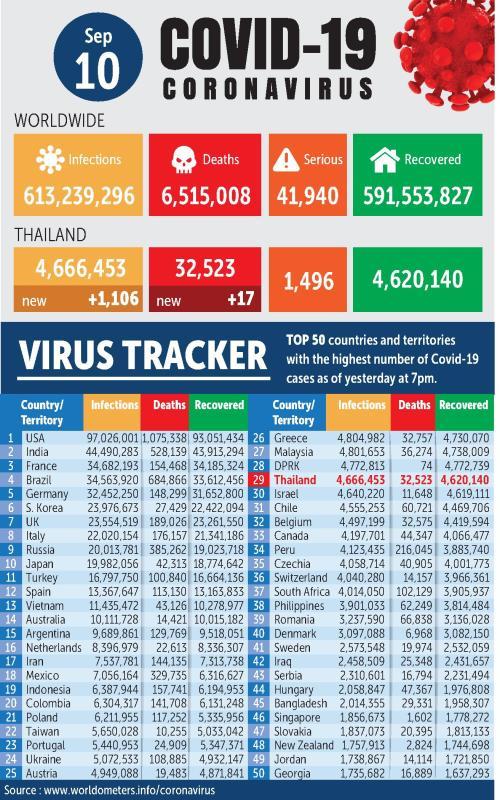