Migrants were to ‘train in terror’
Thailand
General

Migrants were to ‘train in terror’

Police suspect the illegal Muslim immigrants found here recently were using Thailand and Malaysia as transit points to travel on to Turkey where they allegedly would be trained for terrorist plots. 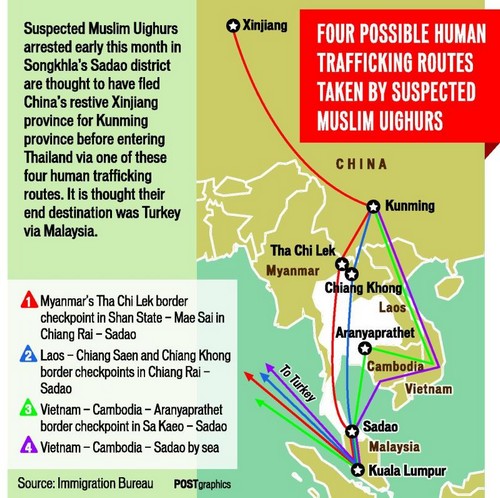 The suspicion has been unveiled by a police source close to the investigation into the separate entries of groups of 112 and 296 Muslims into Thailand.

Those in the first group were arrested late last year and detained in Bangkok’s Suan Phlu immigration office while the second group were recently arrested in Songkhla – 219 at a rubber plantation on March 12, and 77 near a local school in Sadao district on March 20.

It remains unclear what nationalities the immigrants hold, although Chinese authorities have identified 30 people of the group of 112 as Uighur ethnic Muslims from the far western region of Xinjiang, which is viewed by Beijing as a hotbed of separatist terrorism movement.

The group of Muslim immigrants arrested at the rubber plantation claimed they came from Turkey. 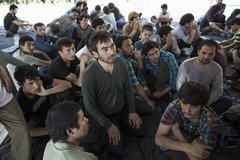 Refugees believed to be Uighurs from Xinjiang in China gather inside a temporary shelter after they were detained near the Thailand-Malaysia border in Hat Yai. (Photo: Reuters)

After an initial investigation, authorities believe the groups of 219 and 112 actually belong together, said Immigration Bureau chief Panu Kerdlarppol.

However, in a recent interview with the Bangkok Post, Lt Gen Panu refused to provide specific details about their nationalities, saying the information may affect international relations.

Beijing claims these Muslim immigrants are Chinese and look set to take them back, while Turkish officials have also expressed willingness to help the group travel to Turkey.

According to the Immigration Bureau and information obtained from Chinese and Thai authorities, it it more likely these Muslims came from China.

Lt Gen Panu admitted he learnt then that some Chinese Muslims had tried to enter Thailand secretly to go to the third country.

The same police source quoted some Chinese police as saying some of the migrant Muslims wanted to travel to Turkey allegedly to be trained in weapons use and use the knowledge, on returning to China, to support separatist movements and launch terrorist attacks.

The Chinese police also claimed some of the Muslim leaders allegedly worked with the Turkish government and helped Uighur Muslims leave China illegally, the source said.

These Muslims spent 14 days travelling from Xinjiang to the Thai border.

After they meet in Kunming in southern China, they will be divided into four groups to enter Thailand through Myanmar, Laos, Vietnam and Cambodia, before crossing the Gulf of Thailand to Songkhla province, according to a source at the Immigration Bureau.

An initial investigation found evidence that indicated the arrested Muslim immigrants might come from China, although they claimed before authorities they are Turkish.

However, officers who checked their belongings found many items including bus tickets, refresher towels and other personal items with them which carried the Chinese language.

“Immigration police are not stupid,” the source said, adding the officers know what they are up to. (Continued below the photo) 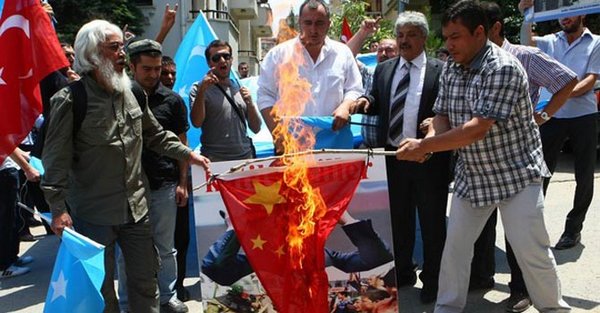 Uighur separatists from China already are active in Turkey. This anti-Beijing protest in 2012 took place outside the Chinese embassy in Ankara. (AFP photo)

They could talk to Turkish authorities, but when they met a Turkish interpreter arranged by the Immigration Bureau, they could not communicate well.

“The interpreter believed they could not speak Turkish,” the source said.

This group planned to travel to the Malaysian capital where they would be given Turkish passports.

However, the suspects’ trip to Turkey was cut short in Thailand after their arrest by the authorities.

Pol Lt Gen Panu said Thai authorities are handling the case carefully because both China and Turkey are now involved.