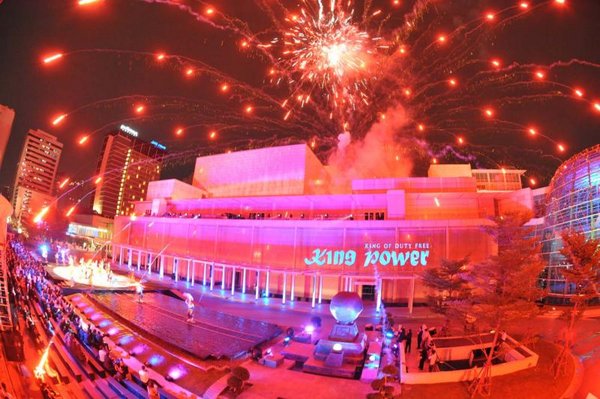 Five years ago this week, King Power was hosting a lavish celebration of its 20th anniversary as the king of Thai duty-free, but the military regime is determined to turn Saturday's 25th anniversary into a sadder occasion.

King Power, the country's largest duty-free company, is the sole operator of duty-free shops at airports overseen by the Airports of Thailand.

They are Suvarnabhumi airport, Don Mueang airport, Chiang Mai airport, Phuket airport and Hat Yai airport. Contracts at each airport last 10 years and can be renewed for another four years.

ACM Prajin said he will raise the matter at a meeting of the National Council for Peace and Order's economic division, of which he is chairman.

A committee will be set up to study the details, ACM Prajin said.

He said he also agreed in principle that an online system should be set up to supply information on duty-free transactions at King Power shops to the AoT, so AoT can gain access to the data which will be used to calculate its share of revenues.

"There are calls for more competition in duty-free businesses and for greater access to information on actual figures of daily duty-free transactions and the returns for the AoT," ACM Prajin said.

Although he said he has not yet come up with any policy on the matter, he agreed there should be more competition among operators, saying a study will be carried out to look at the details.

AoT chairman Prasong Poontaneat said preparations are being made to install the online system to supply data on day-to-day duty-free transactions to the AoT.

However, Mr Prasong, who is also director-general of the Revenue Department, said information on duty-transactions can still be checked even if there is no such system.

He said the AoT has no problem if more than one duty-free operator is allowed at the airports, because the AoT would stand to benefit from revenue from space rental, and shares of incomes from sales of duty-free goods.

Mr Prasong said King Power is the only duty-free operator, which has led to criticisms of a monopoly, though he said many customers seem happy with the service offered.

Overall, King Power's management and services have been recognised by both domestic and foreign travellers and it offers products at competitive prices, compared with duty-free shops in other foreign countries.

"AoT has no problem if there will be more duty-free operators. But it may not be easy for new operators to compete against the existing one," Mr Prasong said.

An AoT source said that under the concession contract, the company must give AoT a minimum income of 1.4 billion baht as well as give AoT a 15% share of its sale revenues annually.

The source said King Power's contracts for Suvarnabhumi, Chiang Mai, Phuket and Hat Yai airports would expire in 2016 and the AoT would consider extending the contracts for more four years if nothing else comes along.

King Power executives could not be reached for comment Sunday. 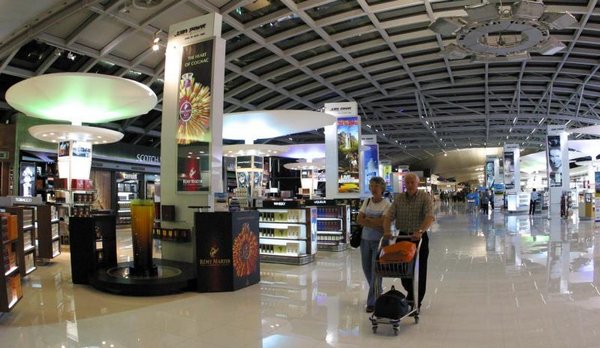 King Power's Suvarnabhumi airport operation, seen here at its 2006 opening, is one of the largest in its 55-outlet duty-free operation.