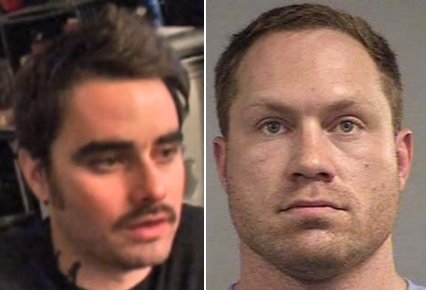 Ryan Edward McPherson (left), 31, and Daniel Jamon Tanner, 33, are long-time friends who have been involved in several projects of questionable taste, including the notorious Bumfight videos in which homeless people were paid tiny amounts of money to beat each other.

The Bangkok South Criminal Court on Tuesday issued arrest warrants for Ryan (aka Ryen) Edward McPherson, 31, and Daniel Jamon Tanner, 33, on charges of theft and false declarations in violation of the Customs Act after police presented evidence suggesting they stole preserved human remains from the museum and attempted to ship the organs to the United States.

National police deputy chief Pol Gen Ruangsak Jritake said authorities are coordinating with Interpol to detain them after they reportedly fled to Cambodia on Sunday morning through Aranyaprathet district in Sa Kaeo province.

In Washington, the Federal Bureau of Investigation (FBI) was looking into the case to see whether any US laws were broken by the two American tourists who police say tried to ship the preserved human parts from Bangkok to Las Vegas.

FBI spokeswoman Bridget Pappas confirmed the investigation is focussed on Mr McPherson and Mr Tanner, who were questioned after police were alerted to three packages labeled "toys".

Pol Maj Gen Sombat Milintachinda, commander of investigations at the Metropolitan Police Bureau, said warrants were distributed to every border checkpoint in Thailand and neighbouring countries.

A DHL processing office on Saturday night detected the body parts in acrylic boxes preserved in formaldehyde. The packages were destined for three locations in the US.

The first parcel contained the partial head and face of an infant. The second contained an infant’s right foot cut into three pieces. The last one contained two pieces of tattooed human skin and a human heart.

Mr McPherson and Mr Tanner, who were marked as the senders, were questioned and released without charges because police found they had no criminal records, authorities said.

The suspects said they bought the human parts from a black marketeer near the Memorial Bridge and were sending them back to the US to tease their friends.

But on Monday, Siriraj Hospital confirmed the remains were stolen from its museums. The suspects were visible on CCTV footage at both museums' registration counters on Nov 13, the same day the pair entered Thailand.

The footage did not, however, show the suspects stealing any exhibits. Siriraj Hospital has filed a complaint with the police to investigate the case.

Police now are trying to determine the real motive behind the theft, whether it was for commercial or superstitious purposes. Police doubt hospital employees were responsible.

The theft charges carry a jail term of one to five years or a fine of up to 10,000 baht, while the false declaration charges carry a penalty of six months in jail and a 500,000-baht fine.

This was apparently not the first brush with notoriety for Mr McPherson and Mr Tanner.

Photos of them talking with police on Sunday revealed they were the producers of the controversial Bumfights video in 2002. Mr Tanner was arrested four months ago and charged in a major marijuana trafficking case, in which he is awaiting trial.

Bumfights featured homeless people brawling and performing dangerous stunts on the streets of Las Vegas in exchange for payments from the filmmakers.

The videos were shunned as exploitative and banned in several communities. The filmmakers now wanted in Thailand sold the rights to the video series to another company, which produced three sequels.