Four people were killed and 32 others injured in an accident involving a bus carrying officials of the Bangkok Metropolitan Administration's budget department and two pick-up trucks this morning, reports said. 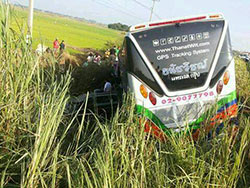 Two people were killed and 32 others injured when  this bus rear-ended two pick-up trucks in Ayutthaya province. (Photo by Sunthon Pongpao)

The BMA officials, some of them high-level executives, were heading for a seminar in Chiang Mai province on three buses.

The accident occurred on Highway 347 (Pathum Thani - Bang Pahan) in tambon Pho Sam Ton in Ayutthaya's Bang Pahan district, when one of the buses rear-ended two pickup trucks.  The bus and the two trucks then plunged into a roadside ditch.

Pol Lt Siriwit Kaewkanya, of Bang Pahan police station, said four people were killed. They were Somkiat Satri, 46, the bus driver; a BMA official identified only as Jirasak; Boonlue Saengpraprai, 60, a passenger in  one of the pickups; and Sakol Thareesit, 48, the driver of the other pickup truck.

The 32 injured were admitted to Ayutthayal, Phra Sangkharat and Bang Pahan hospitals.

The exact time and circumstances leading to the accident were not known.