The arrests followed the issuance of warrants approved by a court.

The five are accused of citing the monarchy to obtain benefits and money from others, illegally collecting debts, illegally detaining others, and extortion, national police chief Somyot Pumpunmuang said. 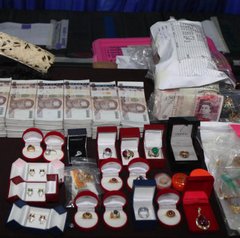 One part of the storehouse was set aside for hundreds of millions of baht in cash - including a huge wad of English 20-pound notes.

Police spokesman Prawut Thawornsiri said Mr Natthapol, who was previously in the military, has been stripped of his rank.

Mr Natthapol was among 14 soldiers who were granted the Tritraphon Mungkut Thai royal decoration on Nov 20 to mark the occasion of His Majesty the King's birthday on Dec 5.

Pol Lt Gen Pongpat and 11 other suspects — six police officers and five civilians — are accused of receiving bribes in exchange for transferring or promoting police officers, demanding money from oil smuggling gangs, making money from gambling businesses, laundering money, and citing the monarchy as a way to gain benefits.

Amongst the evidence collected were huge amounts of cash, rare artefacts, expensive Buddha images and amulets, and gold ornaments worth billions of baht belonging to Pol Lt Gen Pongpat and other suspects. Luxury vehicles and land deeds were also seized.

Both the Anti-Money Laundering Office and the National Anti-Corruption Commission have stepped into the investigation over the gang’s alleged illegal activities and unusual wealth.

Police said the gang had been collecting bribes for years, adding there would be more arrests and more ill-gotten assets seized.

Pol Gen Somyot said there are still more assets belonging to Pol Lt Gen Pongpat and his associates that officers have not been able to remove for storage at police facilities such as rare and expensive wood that would require more than 60 lorries to transport.

The national police chief dismissed a rumour, however, that more than 40 other police officials were involved with the illegal activities.

He confirmed police were expanding their investigation to find out whether more people were involved but refused to elaborate on the details.

A source said security agencies had obtained an investigation report concerning the ex-CIB chief case which contained a record of bribe payments made to Pol Maj Gen Boonsueb Phraithuean, former chief of the Marine Police Division, who is one of the six other police suspects arrested.

The report provided details of money that southern businessman Sahachai Chiansoemsi, alias Sia Jo, had allegedly paid to Pol Maj Gen Boonsueb and about 33 other high-level law enforcement officers, including those in the justice system, ranging from 1,500 baht to 12 million baht each time, the same source said.

According to the report, the 33 people included deputy police station chiefs and police inspectors in the far South and those attached to the Crime Suppression Division (CSD).

Other civil servants have also been named as recipients of Mr Sahachai's alleged bribes. They included several officials at the Interior Ministry, two military officers, a number of officials in the Department of Special Investigation, the Customs Department, and the Excise Department, the same source said.

Pol Maj Gen Boonsueb allegedly confessed that he had received 12-15 million baht in bribes each month from oil smuggling gangs in the South.

A Pattani police officer allegedly helped Mr Sahachai to escape after he was sentenced by the Pattani Provincial court on Oct 9 to a year and nine months in prison in a forged documents case.

He also faced prosecution for oil smuggling and tax evasion.

As well as Mr Sahachai, authorities are investigating other groups of people who have been paying bribes to state officials, the source said.

These people included businessmen, politicians, local leaders, and influential figures involved in oil smuggling and drug trade activities in the southern border areas and they are believed to be linked with the southern unrest, the source said.

National police chief Somyot said Mr Chuvit needed to prove his allegations by providing evidence that wrongdoings had been committed.