An AirAsia flight abruptly returned to Don Mueang airport after a Chinese passenger splashed a flight attendant with boiling water after she and her boyfriend found they had been allocated separate seats. 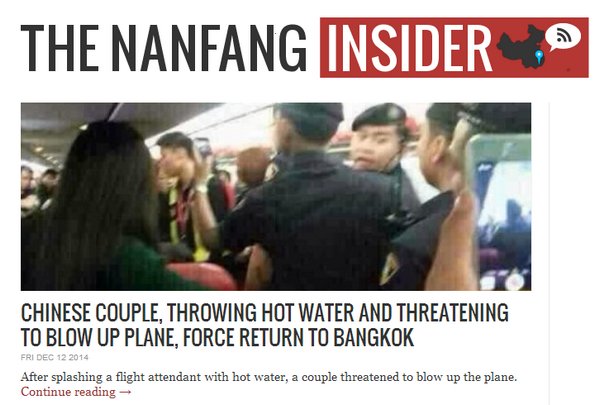 After the incident was reported by a Chinese blog, the airline issued a statement saying the incident happened on FD9101 to Nanjing on Thursday after take-off from Don Mueang airport at 5.55pm.

The statement said the Chinese couple became enraged when they were told they would have to sit apart from each other and berated the crew member. The captain decided to return to Don Mueang and asked the passengers to disembark. No charges were laid.

According to a regional, southern China blog, TheNanfang.com, which reported the incident, the flight had 174 passengers on board. The website reported that witnesses on the flight said the man threatened to blow up the plane and his girlfriend told other passengers she wanted to commit suicide, which led to the decision to turn around.

The couple found they would not be sitting together which happened because they were part of a tour group and were seated in alphabetical order. A flight attendant fixed the situation and found seats for them together, but they still complained loudly.

The woman bought a bowl of instant noodles and asked for boiling water which she promptly splashed on the flight attendant.