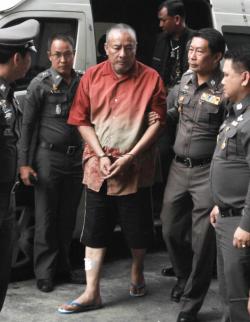 The officer has failed to respond to a summons from investigators in the Pongpat case, police said yesterday.

Pol Lt Col Songruk is the deputy superintendent of the CSD's sixth division.

Investigators want to question him as a witness in the case against the former CIB chief.

The report said that Pol Lt Col Songruk has been absent from work for 15 days and has cut off contact with the police office.

Taking leave for more than two weeks without notice is considered a serious offence that is punishable with disciplinary action, he said.

Pol Col Akkaradej said he is planning to ask the Metropolitan Police Bureau commissioner to seek an arrest warrant for Pol Lt Col Songruk over his act of defiance.

The evidence is connected to allegations the former CIB chief demanded money from oil smugglers and cited the monarchy for personal gain.

Pol Lt Gen Pongpat was arrested along with a dozen others late last month and is facing a raft of corruption allegations. Among them are that he took bribes in exchange for promoting police officers and ran gambling businesses. Others have since been arrested.

The case file will then be scrutinised by national police deputy commissioner Pol Gen Ake Angsananon, who oversees legal procedures, before being submitted to prosecutors, police said.

Borvornvate Rungrujee, the director-general of the Fine Arts Department, said the ministry's website is now displaying pictures of antiques, rare artefacts, pottery and paintings seized from Pol Lt Gen Pongpat and other suspects in his network.

The Fine Arts Department confirmed that a number of the seized antiques, including Buddha images and figures of deities are centuries old.

Most of the antiques were metal and wooden Buddha statues dating from the 23rd to 25th Buddhist centuries. They exhibit delicate craftsmanship in Cambodian, Chinese, Indian, Myanmar and Western styles.

The abbot of Wat Luang temple in Chiang Rai has asked the authorities at the department to inspect the seized evidence.

A Buddha statute that had been kept at the temple was stolen, the abbot said.