The Crime Suppression Division press conference announcing the arrest of the former bank branch manager in the KMITL embezzlement scandal.

King Mongkut's Institute of Technology Ladkrabang is a huge campus in the eastern Bangkok district, with about 18,000 students enrolled in classes that are mostly geared towards technology and research.

The financial scandal exploded with the arrest of the university’s senior financial officer and a former bank branch manager.

Songklod Sriprasong, 40, former manager of Bank of Ayudhya’s Big C Srinakarin branch, was arrested at his house on Soi On Nut in Bangkok on Tuesday.

He was wanted on a court warrant issued on Monday for allegedly colluding in embezzlement and falsifying official documents.

Amporn Noisamrit, 56, head of KMITL’s financial division, was apprehended while receiving medical treatment in a private hospital in Bang Na. She is now under police  watch for later questioning. 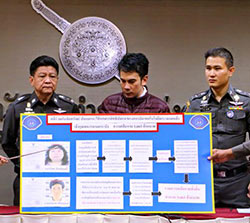 The Crime Suppression Division held a press conference to announce the arrest of the former bank branch  manager.

The alleged embezzlement came to light after KMITL acting rector Monai Krairiksh assigned a lawyer to file a complaint with the Crime Suppression Division (CSD) on Dec 16, seeking action against those involved in alleged corruption involving 80 million baht.

The institute later discovered that the total amount of money missing from its accounts was 1.663 billion baht from 2012 to this year, including the 80 million baht, Pol Col Jeerapop Puridetch, acting chief of the CSD’s sub-division 1, said.

According to the investigators, Ms Amporn had told a KMITL committee on Oct 1 that the institute’s money deposited with the Bank of Ayudhya’s KMITL branch received only a small amount of interest. She proposed that the money be transferred to the bank’s Big C Srinakarin branch, where Mr Songklod was  manager.

She had sought approval from the university panel to withdraw 50 million baht from the institute’s account to buy a cashier's cheque for deposit at Bank of Ayudhya’s Big C branch, and later another 30 million baht to the same bank.

The institute later found that there was no money in the new bank account. Ms Amporn had claimed the money had been instead deposited with Siam Commercial Bank’s Big C Suwinthawong branch.

However, thorough checks found the two bank accounts, at Suwinthawong and Srinakarin, had been falsified by Mr Songklod, who had allegedly doctored the figures.

The institute had then checked all its money deposited by the finance division at various commercial banks from 2012 to this year and initially found about 1.583 billion baht was missing.

Col Akaradech said cashier cheques were deposited under the name Poonsawat Boonsawat. Police were investigating what role "Mr Poonsawat" played in the case.

A CSD source said the money had been transferred to several third-party accounts.

Mr Songklod denied coordinating the embezzlement, but admitted that he had known Ms Amporn as a customer for nearly 10 years. He would go to meet Ms Amporn to receive documents for the withdrawal of money or transfer, and she always provided authorised signatures.

Mr Songklod said it did not occur to him that Ms Amporn, as a senior officer of a respected institution, could be involved in fraud. He said he had lost his job at Bank of Ayudhaya, Big C Srinakarin branch, two months ago as he did not pass probation.

Mr Songklod said he realised there was some irregularity in the movement of money, but Ms Amporn said the money would be spent for the benefit of the institution and she would return the money in January, so he did approve the transactions. He denied receiving any money from Ms Amporn.

Former KMITL rector Thawil Puengma said on Tuesday morning that he was ready to be investigated, and believed there might be an organised gang involved in the scandal.

He insisted he found no irregularities in the institute’s accounts when he served as its rector in 2012. All money withdrawn required approval from three people – the rector, a deputy rector and the head of the finance division.

The university issued a statement late on Tuesday afternoon confirming that the management had found irregularities in its bank deposits and asked the police to investigate. The institution is in the process to examine the amount of money.

However, the university insisted that this case will not impact its current management.

It was reported earlier that Mr Songklod was previously sacked by Siam Commerical Bank, according to a police source, but this was not confirmed. 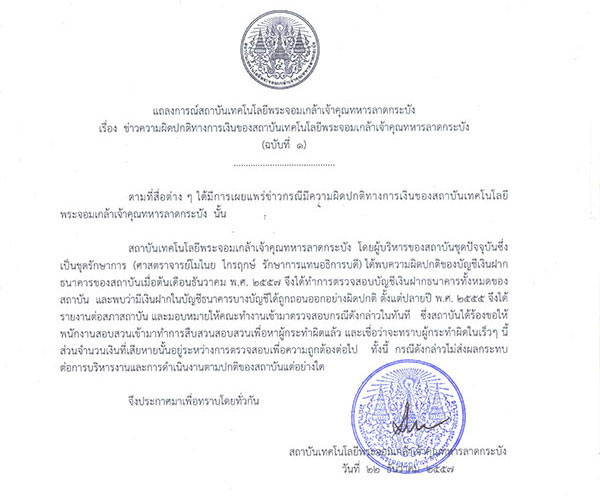 The statement issued by King Mondkut's Institute of Technology confirms an investigation into the alleged embezzlement.

Umbrellas as shields, secure chat groups and hand signals as warnings of a pending police crackdown -- Thailand's pro-democracy protesters have taken inspiration and lessons from their counterparts in Hong Kong.