The National Legislative Assembly (NLA) is likely to vote to impeach former prime minister Yingluck Shinawatra over her alleged negligence in the rice-pledging scheme, a source in the NLA says.

NLA members with close ties to the military have been given a hint on which way to vote in the impeachment motion, the source added. 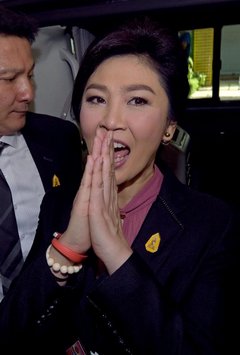 Votes on whether to impeach Ms Yingluck and former parliament speakers are currently set for next Saturday, Jan 23.

That hint was in the complaint filed with the Crime Suppression Division Tuesday by Commerce permanent secretary Chutima Boonyapraphasorn against 77 people contracted by the previous government to store or survey rice.

The commerce permanent secretary was in a state official's uniform when she turned up at the CSD to lodge the complaint.

The source said the NLA members understood the signal.

But if Ms Yingluck is let off, the National Council for Peace and Order, the NLA and the government will come under pressure, which may derail reforms, the source said.

The source said the NLA members who are likely to vote to impeach Ms Yingluck include those in the so-called Group of 40 Senators, academics and some government officials, while those opposing the move include retired military and police officers.

According to another source who is close to the Group of 40, those against impeachment are likely to change their minds and vote to impeach. But it remains to be seen if they will break ranks on the day of the vote.

The impeachment requires three-fifths of the NLA members' support, or 132 votes.

The supposed sign from Ms Chutima may be clear, but some NLA members may opt for abstention to avoid confrontation.

"Those who don't want any confrontation may choose to abstain when the vote is cast," said the source.

Meanwhile, Prime Minister Prayut Chan-o-cha said Tuesday there is nothing special about a planned meeting of government representatives and the NLA and the National Reform Council (NRC) tomorrow.

He said Deputy Prime Minister Wissanu Krea-ngam has been assigned to talk with the NLA and NRC representatives about reforms, not impeachment.

He also urged the public not to link the impeachment and the Commerce Ministry's complaint, saying the authorities had been preparing to file the complaint for some time.

Gen Prayut said impeachment cases are the same as other court cases where a ruling is made based on evidence given by both sides.