Explosive debris similar to that at Siam Paragon

Police said Tuesday investigators believe the two explosions near Siam Paragon on Sunday are linked to a deadly blast which killed two men in Min Buri during the Bangkok Shutdown protests, almost a year ago. 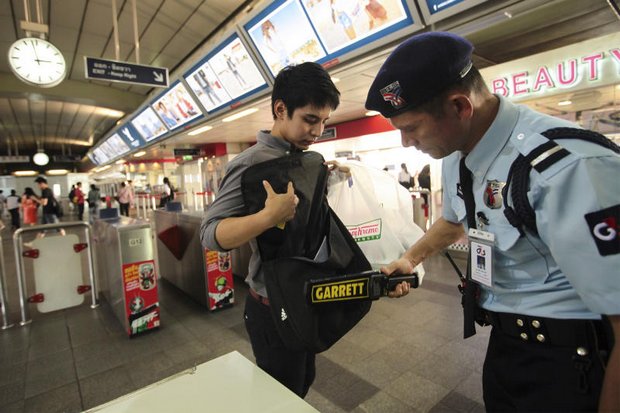 A security officer at the BTS Siam station runs a hand-held metal detector over a Skytrain passenger's bag. Security has been temporarily stepped up following Sunday's twin explosions of time bombs, particularly around Siam station and its walkway leading to Siam Paragon. (Photo by Patipat Janthong)

Metropolitan Police chief Sriwara Rangsiphramanakul said that investigators had examined bomb fragments collected from the blast site and found that 90% of them were similar to those found at the Min Buri blast scene.

Speaking after a meeting with investigators handling the bomb incident, Pol Lt Gen Sriwara said photos of two male suspects captured on security camera footage at Siam had been compared to those suspected of involvement in a spate of bombings during anti-government protests last year.

Police have made considerable progress in their probe, Pol Lt Gen Sriwara said.

"Warrants for the arrest of the two suspects are expected to be issued by noon today," he said.

On March 29 last year, two men were killed when a home-made bomb hidden in a motorcycle they were riding accidentally exploded in a car park in Min Buri.

Police later searched their house nearby and found bomb-making equipment.

The deceased were probably members of a group using the house to assemble explosives, said police.

According to police, the two men were members of a group of 10 who rented a house for assembling home-made bombs destined for use in attacks in public areas.

At the time of the Min Buri explosions, police linked the blast to attempted attacks at the Office of the Attorney-General and Institute of Judicial Development in February last year.

The attacks occurred during the height of anti-government demonstrations led by the People's Democratic Reform Committee.

At the time, police said the methods used to make the bombs were similar and were probably the work of the same culprits.

Sunday's explosions occurred on a walkway between Siam BTS station and Siam Paragon shopping centre at 8.20pm, sparking panic among shoppers and tourists.

Police initially said the blasts were caused by a transformer explosion, but later revealed they were caused by two pipe-bombs hidden behind an electrical control panel at the entrance to the mall.

The footage shows two Asian men of moderate height, one wearing a white cap, and the other wearing a black cap, with suspicious-looking bags, Pol Lt Gen Prawuth said.

Security has been stepped up at places where crowds gather, including BTS stations, bus terminals, department stores, cinemas and night markets.

Police are leading the probe, with the military working as their assistants, he added.

Prime Minister Prayut Chan-o-cha said he has instructed the National Council for Peace and Order to deploy more soldiers to at-risk areas.

He ordered the soldiers to take care while going about their duties to avoid any possible repercussions that might result from the increased military presence.

Gen Prayut asked that all suspects be arrested quickly to restore people's confidence.

He warned that any attempts to stir up conflict and incite violence will adversely affect tourism, trade and investment.

Gen Prayut stressed that all security agencies must find measures to prevent any future violence and noted that some groups have defied martial law.

"The existence of martial law does not mean that everyone should fear it. We have been lenient, but some groups still attempt to incite unrest. Can you assure me that nothing will happen if there is no special law?" said Gen Prayut.

He denied suggestions that the military played a role in the bombings to prolong enforcement of martial law.

Deputy Prime Minister Wissanu Krea-ngam said the government does not intend to lift martial law at the moment.

He was responding to claims the government planned to revoke martial law and invoke Section 44 of the interim constitution to deal with security situations instead.

Two months ago, the NCPO's advisory panel discussed which laws could be used as an alternative to martial law, Mr Wissanu said.

Alternatives included the Criminal Code, the emergency decree, the Internal Security Act and Section 44, Mr Wissanu said, however, the government has not yet given any order to revoke martial law. 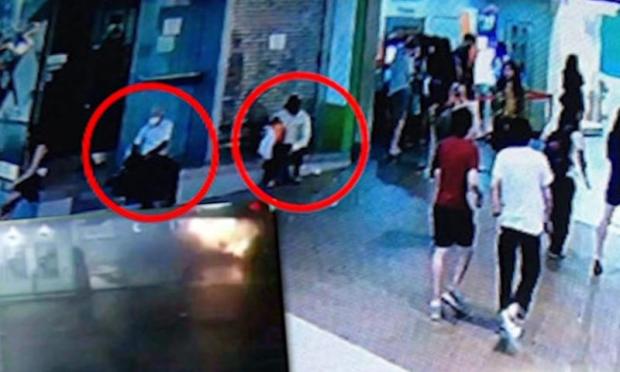 Two men, circled in red, each wearing a cap to disguise their identity and carrying orange plastic bags each believed to contain a bomb, are caught on a security camera near Sunday's explosion site at Siam Paragon, shortly before the bombs went off.