Energy activists are vowing to take action if the government insists on opening the 21st round of bidding on concessions for oil and gas exploration. 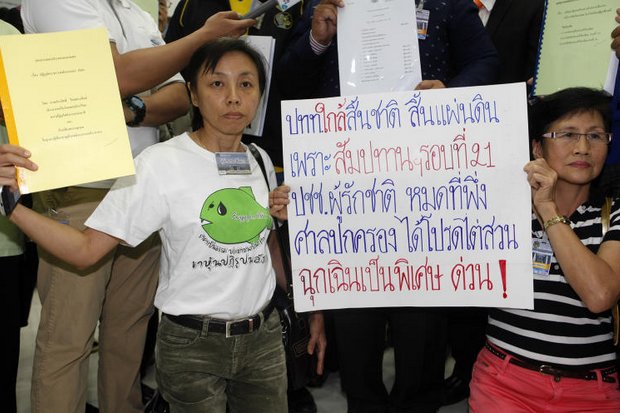 Energy reform advocates petitioned the Administrative Court to suspend the 21st round of bidding for oil and gas concessions and review the government's measures on energy security. (Photo by Pattarapong Chatpattarasill)

Speaking after a meeting with affiliated energy reform activist groups in Nakhon Si Thammarat Wednesday, Partnership for Energy Reform (PER) member Prasitchai Nunuan said people in the South had few choices but to oppose the state's policy.

The meeting was attended by about 100 members of civil groups, the PER, and representatives of communities affected by the state's development policies.

The groups called the meeting after the government insisted it would continue with the concessions.

It plans to announce the list of bidders on Feb 18.

Mr Prasitchai said the group will take action before the bidders are announced. It has yet to decide what form the protest will take.

He said they they might stage another rally despite the regime's imposition of martial law that bans demonstrations or gatherings of more than five people.

Mr Prasitchai said the group had cooperated with the National Council for Peace and Order (NCPO) and the government when asked, but the government eventually decided to press on with the 21st bidding round for exploration concessions despite concerns raised by the National Reform Council.

The NCPO asked the groups to call off a protest walk from the South to Bangkok last year as they pushed their cause for energy reform.

They were told to wait for the NRC's decision on the concessions, he said.

He said the activists wanted the government to switch from concession to a production-sharing system which in their view will benefit the country more.

This year's reserve margin is expected at 25-28% against the 15% standard margin.

The reserve margin is likely to stay at high levels for the next 10 years as a result of flawed power purchase agreements that the state signed with energy investors, he said.

Meanwhile, the Central Administrative Court on Wednesday ruled in favour of the Ministry of Energy over the case of a petroleum concession of 25 blocks in the Gulf of Thailand.

The Stop Global Warming Association and 308 plaintiffs filed the case against the ministry in November 2010, accusing the Department of Mineral Fuels, the Ministry of Energy, cabinet members, the National Environment Board and the Office of Natural Resources and Environmental Policy and Planning of negligence in their duty.