Rescue workers worked through the weekend to recover the 26 hastily buried remains from the Songkhla death camp, and provide coffins for burial. (Photos by Pornprom Satrabhaya)

Thousands of Rohingya people who are possibly victims of human trafficking are being kept in at least 60 detention camps scattered throughout mountains along the Thai-Malaysian border, says a former president of the Rohingya Association of Thailand.

"The discovery of the detention camp [last Friday at Ban Taloh in tambon Padang Besar of Songkhla's Sadao district] is just the tip of the iceberg. Currently there are at least 60 detention camps along the Thai-Malaysian border," Abdul Kalam told the Bangkok Post Sunday, adding that about 150-800 refugees are being held in each camp.

Most of the camps are situated on the Malaysian side, he said.

"According to the information I have obtained there are many detention camps along the Thai-Malaysian border," Pol Gen Chakthip said.

Lt-Gen Prakarn Chonlayuth, commander of the 4th Army Region, said he will ask Malaysia to conduct more patrols along the border to suppress human trafficking.

Meanwhile, Mr Kalam attended the burial ceremony of 20 of the 26 bodies recovered from graves in tambon Padang Besar of Songkhla's Sadao district.

The burial was held at a Muslim cemetery in Hat Yai district.

The bodies of the others are being kept at Songklanagarind Hospital in Hat Yai district for autopsies.

Mr Kalam said he knew of the detention camps from two Rohingya compatriots, whom he helped to escape from a human trafficking network after they fled a detention camp last month.

The men, aged 23 and 30, were lured into a human trafficking network from their homes in Myanmar's Rakhine state.

When they arrived in Thailand a few years ago, they were brought to a detention camp in tambon Padang Besar of Songkhla's Sadao district.

The men said that they were beaten by members of a human trafficking network and forced to work under slave conditions while waiting for ransom money to come in from their relatives in Myanmar.

The governments of Thailand and Malaysia need to work together to solve the problem and take legal action against all those involved, regardless of whether they are state officials or civilians, Mr Kalam said.

He played a recording of the voice of 28-year-old Tunusar, a survivor of a death camp for human trafficking victims in the jungle in Songkhla.

He interviewed Mr Tunusar, who was bed-ridden at Padang Besar hospital in Sadao district, on Saturday.

Mr Tunusar was held captive at the camp for nine months after being kidnapped from his hometown in Bangladesh and brought by boat to a jungle camp in Thailand.

"I saw at least 40 people die while I was staying at the camp. Ten were Bangladeshis and the others were from Myanmar or Rohingya. They died because of malnutrition, starvation or being beaten to death," Mr Tunusar said on the clip.

"I want to go home to Bangladesh," he said.

The brokers controlling the camp were men named Hayi, Amartali, Arnua, Saw Lim, Rana and Heidra, he said. He was beaten many times after the brokers called his mother in Bangladesh and learned she didn't have the money to pay his ransom.

Another Rohingya man who was previously jailed at the camp, who wishes not to be named, recounted the horrors he saw to police Sunday.

He said a Rohingya man named Kasim was killed by Mr Arnua, a well-known Rohingya trafficking broker, at the camp.

Mr Arnua used a heavy stick to beat Kasim, the nephew of a Rohingya man named Kuramia, to death.

Nakhon Si Thammarat police said Mr Arnua had abducted Kasim and demanded a 95,000-baht ransom, but the nephew was not freed after the money was sent.

Mr Arnua then demanded another 120,000 baht, prompting Mr Kuramia to go to the police, which prompted Mr Arnua to kill the nephew, they said.

Police arrested Mr Arnua in Muang district on Wednesday and charged him with fraud and kidnapping. They are gathering evidence to prosecute him for human trafficking.

Mr Kuramia had feared his nephew was killed and buried in tambon Padang Besar in Songkhla's Sadao district, which led to the police's discovery of the graves on Friday, police said.

The witness also told reporters that his mother in Myanmar paid ransom money of 6,000 Malaysian ringgit (55,250 baht) to free him from the camp prior to its discovery by authorities.

While in the camp, the witness heard news of more than 500 deaths in similar camps along the Thai-Malaysian border.

Photo below: Muslims in the South have arranged coffins and a mass funeral at Hat Yai district for 20 of the 26 remains recovered from the mass grave discovered last Friday in nearby Sa Dao district of Songkhla province in the South. 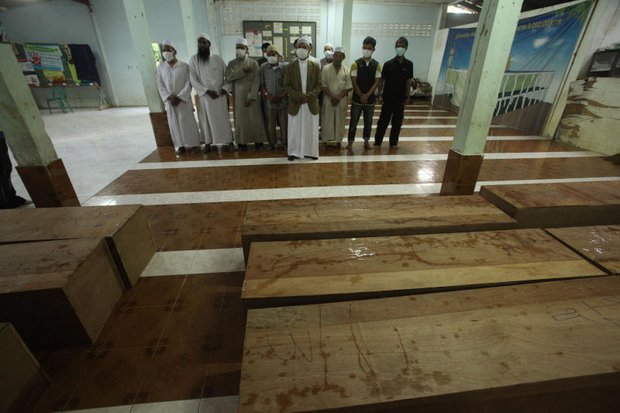