Malaysia and Indonesia said Wednesday they would no longer turn away migrant vessels, responding to world pressure by offering to take in a wave of boatpeople if they can be resettled or repatriated within a year.

"The towing and the shooing (away of boats) is not going to happen," Malaysian Foreign Minister Anifah Aman said at a joint press conference with his Indonesian counterpart Retno Marsudi after talks on the issue. "Indonesia and Malaysia agreed to continue to provide humanitarian assistance to those 7,000 irregular migrants still at sea,"

"We also agreed to offer them temporary shelter provided that the resettlement and repatriation process will be done in one year by the international community," Mr Anifah said.

The offer of shelter was applicable only to those people now on the seas, Mr Anifah noted.

Today's talks in Malaysia had also included Thai Foreign Minister Tanasak Patimapragorn, but he was not present for the press conference. Mr Anifah said Gen Tanasak refrained from joining in the offer, saying he had to first refer back to whether the move would be allowed by Thai "domestic laws". 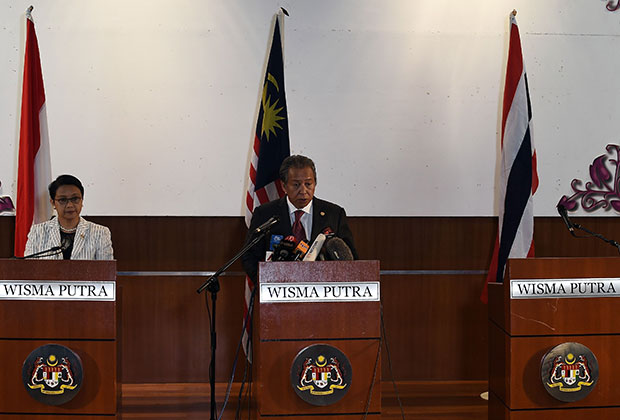 Malaysian Foreign Minister Anifah Aman and his Indonesian counterpart Retno Marsudi stand next to an empty podium set up for Thai Foreign Minister Tanasak Patimapragorn, who refrained from joining the other two countries in offering refuge to boatpeople, saying he had to first refer back to whether the move would be allowed by Thai "domestic laws".

"In the meantime, Malaysia and Indonesia invite other countries in the region to join in this endeavour," Mr Anifah said.

The Philippines yesterday extended an offer to take some of the refugees.

Thailand, Malaysia and Indonesia sparked international outrage by preventing vessels overloaded with starving migrants from Bangladesh and Myanmar's ethnic Rohingya minority from landing on their shores.

Around 3,000 such migrants have swum to shore or been rescued off Malaysia, Indonesia and Thailand over the past week after a Thai crackdown prompted some people-traffickers to abandon their human cargo at sea.

Another 433 people were rescued early Wednesday off Indonesia, with local fisherman who saved them saying many were in appalling shape from their ordeal at sea and that passengers reported some of their fellow migrants had died of starvation. 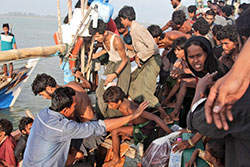 An Acehnese fisherman, lower left, help migrants to transfer to his boat on the sea off East Aceh, Indonesia, Wednesday. Hundreds of migrants stranded at sea for months were rescued and taken to Indonesia, officials said. (AP photo)

In their meeting, the three ministers also promised to take necessary action against human traffickers who have been driving the exodus of Myanmar's persecuted Rohingya Muslims, according to an Associated Press report.

Mr Anifah said the three Asean nations will take steps to bring the perpetrators of trafficking to justice.

Thailand has already arrested several police and local officials after authorities uncovered jungle camps where the trafficked Rohingya had been held until their families agreed to pay ransom for their release.

Myanmar state media on Wednesday quoted a Foreign Ministry statement saying the government "shares concerns" expressed by the international community and is "ready to provide humanitarian assistance to anyone who suffered in the sea."