Farmers to drain canals for crops

Authorities will relax the water ban so farmers like this distressed Suphanburi landowner can try to tend to their parched crops. Meanwhile, a meeting Wednesday will consider ways to force Bangkok citizens to conserve, even including a possible heavy tax on "excessive" water use. (Photo by Pattarapong Chatpattarasill)

Tough water conservation measures for state agencies and households in Bangkok and surrounding areas could be introduced to address the water scarcity crisis.

The proposal will be discussed at the National Water Resources Committee (NWRC) meeting tomorrow.

The move comes amid criticism the government has forced farmers to bear the burden of the crisis by banning agricultural water use without substantial water-saving measures in urban areas.

"Farmers have been prohibited from diverting water to feed their rice crops and they may feel [targetted]," said Jatuporn Buruspat, director-general of the Department of Water Resources (DWR) and the NWRC secretary.

Measures to conserve water in Bangkok and its surrounding areas must be undertaken immediately in order to show that urban people and farmers are treated equally, said Mr Jatuporn.

Bangkok residents use five million cubic metres of water per day, 51% of which is consumed by households and the rest by businesses, the state and industrial sectors, according to a survey by the Metropolitan Waterworks Authority.

The NWRC, chaired by Prime Minister Prayut Chan-o-cha, will discuss how to regulate water use in urban areas.

Thailand could look to countries, such as Taiwan, which charge steep prices for the overuse of water, as a way to encourage households to save water, said Mr Jatuporn.

Measures would first apply to the state. "State agencies must be the first group to lead water saving and prioritise saving water during the crisis," he said.

The DWR, for example, saves tens of thousands of baht per month by refraining from serving water, coffee or tea at meetings. Similar measures could also be introduced in other agencies, he said.

This does not mean the government will ignore farmers, but help must be given according to importance, he said.

The administration does not want anyone to be in trouble, but the way to deal with the issue is to look at the big picture, in which water consumption must be prioritised, the premier said.

Meanwhile, the Department of Royal Irrigation (DRI) has decided to relax controls on water use for farmers suffering from the drought.

Suthep Noipairoj, the department deputy chief, said farmers will be allowed to drain water from public canals to feed crops, as the water situation in key dams is improving due to rainfall in lower northern and upper Central regions.

Farmers in need, such as those with paddy plantations on the cusp of production, will be allowed to use the water first, he added.

The DRI will work with other state agencies to identify the farmers who will be permitted to take the water first.

Permission will be granted on a case by case basis, said Thanar Suwattana, the DRI spokesman, adding that limits on water released from dams are still in place.

Mr Thanar said the situation has improved slightly and more water is flowing into dams, particularly two major dams - the Bhumibol dam in Tak province and the Sirikit dam in Uttaradit province.

It will help the Interior Ministry and armed forces as they get help to people in drought-stricken areas, he said. 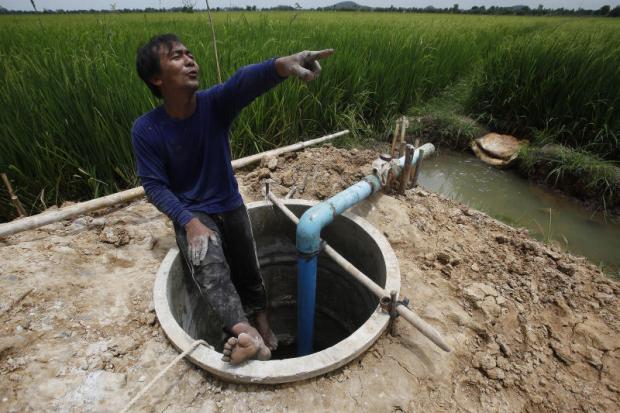 Mr Pairoj sits on the lip of a groundwater well where he installed a pump to draw water from and pump onto his drought-hit farmland. 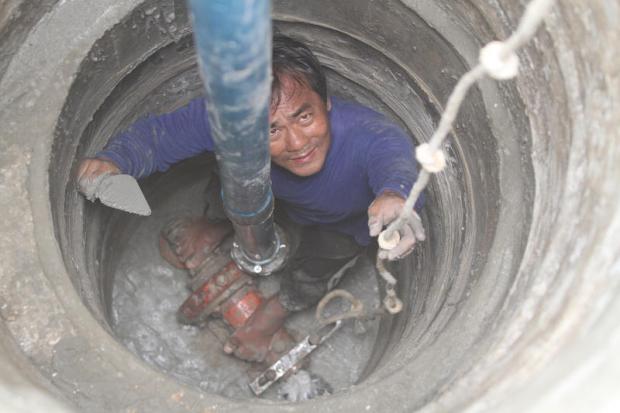 Pairoj Pinthong, a farmer from Ban Goomkok in Suphan Buri's Doembang Nangbuat district, climbs down a water pump shaft to switch on a pump for underground water located deep in the soil. photos by Pattarapong Chatpattarasill