Sunday's Bike for Mom, led by His Royal Highness Crown Prince Maha Vajiralongkorn and his daughter, Her Royal Highness Princess Bajrakitiyabha, in honour of Her Majesty the Queen, had 294,863 riders, the biggest such parade ever. (Photos by Pattarapong Chatpattarasill, Thanarak Khunton)

Hundreds of thousands of blue-clad people nationwide have affirmed their respect, love and loyalty for Her Majesty the Queen and the monarchy with their largest ever bicycle parade which set a new world record Sunday.

The main event was in Bangkok where His Royal Highness Crown Prince Maha Vajiralongkorn led more than 40,000 cyclists who joined the "Bike for Mom" cycling event Sunday evening to mark Her Majesty the Queen's 83rd birthday.

The Crown Prince and Her Royal Highness Princess Bajrakitiyabha led cyclists along the 43-kilometre round-route from the Royal Plaza through Bangkok streets to the 11th Infantry Regiment in Bang Khen.

The event notched up a new record for the world's largest bicycle parade, breaking the previous record set in Taiwan. In 2012, in celebration of the 100th anniversary of the founding of the Republic of China, Taiwan held the "One Bike One" event and drew 72,919 cyclists across the country to ride, according to the World Record Academy.

The previous world record for the largest bicycle parade consisted of 48,615 cyclists at an event in Italy, and was noted by the Guinness Book of World Records.

For Thailand, 294,863 people registered to participate in the "Bike for Mom" parade nationwide. The Guinness World Records committee was also invited to certify the event.

The committee has certified that Thailand now holds the new world record, with 146,266 cyclists nationwide who successfully rode and met its criteria.

People from all walks of life, from children to the elderly, as well as people with disabilities, participated in the event.

In the capital, late-comers braved the heat and bright sunlight, as they stood in the middle of Sanam Luang, queuing for their last minute registration for the event.

Even for those who didn't enroll by the late July deadline, the much-expected parade could not be missed.

It was an historical day, cyclists and curious onlookers agreed cheerfully, adding the temperature, though hot, didn't stop them from coming. Some came as early as 7am. (Story continues after photos) 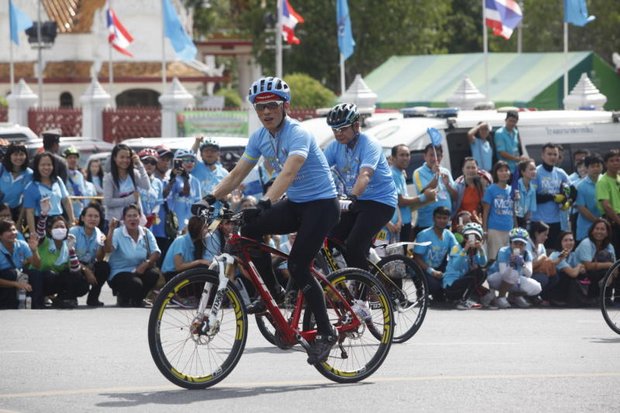 Her Royal Highness Princess Bajrakitiyabha takes a selfie during the 43km ride. (Photo by Thanarak Khunton)

By early afternoon, the attention shifted a few streets down to the front of the Royal Plaza, where many waited for HRH the Crown Prince to kickstart the parade.

Most VIPs, including Prime Minister Prayut Chan-o-cha, cabinet members, court presidents and high-ranking officials as well as diplomats, had their bicycles lined up since morning at the Royal Plaza. They were joined by various politicians, as well as businessmen and celebrities.

This special moment was televised and the sea of blue blossomed to prove how united Thais are in their overwhelming loyalty to the royal family, observers said.

"I'm happy the Royal Family is supportive of cycling events and hope it will be a starting point for Thais to ride their bikes more often," said Supakon Pattanakhunam, an experienced cyclist.

The avid rider says he wants the world to see that Thais chose to ride bicycles as their way of expressing their love for the monarchy.

"It's the first time I have been able to ride with HRH Crown Prince. It might be the only time as well. I wish he'd do that more often," he said, adding he was hoping to show his best skills for this occasion.

Along the cycling route, crowds mostly clad in blue waved blue flags and shouted "Long Live the Crown Prince" when he biked past. The Crown Prince responded by smiling and waving his hand at the people.

It's the first time that such an activity has been held, with HRH the Crown Prince taking part in it side by side with the public, said Boonsong Suthipjit, a medical doctor from the Royal Household Bureau. "I dropped all other activities I had today, to volunteer as a medic here," said Dr Boonsong.

''The day is very special,'' Dr Boonsong added, as he described how the event differed from other royal celebrations.

He feels it allowed people to take a more active part in celebrations than in past such events.

Meanwhile, villagers in several parts across the country attended the Bike for Mom activity as well. In Mae Hong Son, ethnic Karen highlanders in Huai Sua Thao of Muang district rode their bikes as part of the event.

In Phitsanulok, Wattana Kham-in, an 11-year-old disabled boy with no arms, arrived at Phitsanulok city hall in Muang district with his relatives to join the local cycling parade.

In Phayao, Plieng Rakphan, an 83-year-old man attended the Bike for Mom event covering 26km in the province. He said even though his bicycle was old, he wanted to be part of this national activity.