A team of Khon Kaen University researchers inspired by the unrest in the far South has developed the world's first bullet-proof vest made from natural silk.

The silk bullet-proof vest can withstand  .38 and .22 calibre bullets fired from a distance of three metres, Panomkorn Khwakhong, a researcher at KKU’s chemical engineering department, said during a press conference at the university on Tuesday.

The armour, made from silkworm cocoons mixed with a special resin and then hydraulically compressed, is durable and lightweight, said Mr Panomkorn, a chemical engineering lecturer.

The vests are 14-20 millimetres thick, weigh 2.5-4 kilogrammes, and cost only one-third the price of conventional bullet proof vests, he said.

He said silkworm cocoons were used because silkworms are raised and farmed in many areas of Khon Kaen, which has a reputation for quality silk clothing.

His research team collected data and interviewed silkworm raisers and a silk textile handicraft groups in Phu Wiang district and learned about the properties of the cocoons.

“Inspired by the violence in the deep South that has claimed many lives and left security officers there dead and injured, our team decided to develop a bullet proof-vest from silkworm cocoons. They are a raw material in the Northeast and plentiful in Khon Kaen province,'' Mr Panomkorn said.

The significant characteristics of the cocoons, durability and flexibility, were used to develop the vest using chemical engineering principles.

Testing showed the vest could withstand .38 and .22 bullets fired from a distance of three metres, which is level one protection under the National Institute of Justice's standards.

Mr Panomkorn said the silk vest is also able to take repeated hits without deteriorating. His team planned to continue developing the vest and make a version that can withstand automatic weapons fire, such as  the M16 assault rifles used by insurgents in the South.

His team has already obtained a patent for the vest, which also won first prize at a recent local knowledge innovation project contest. 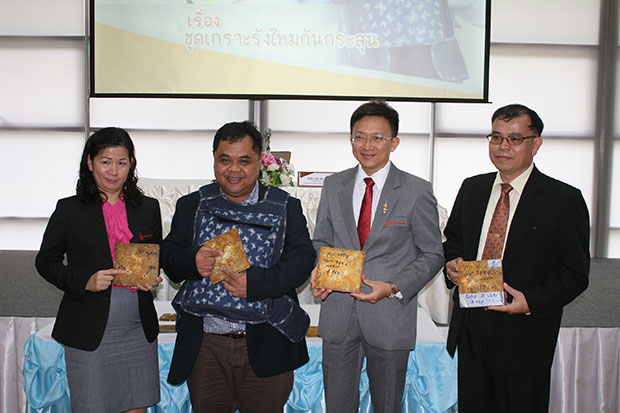 Researchers  from Khon Kaen University show the silk bullet-proof vest they have developed which can withstand repeated hits from .38 and.22 bullets fired from three metres distance. And they cost only a third of the price of a conventional bullet proof vest. (Photo by Jakkrapan Nathanri)

Bangkok's twice-postponed annual auto show opened to the public on Wednesday in the country's first large-scale event since coronavirus restrictions eased, with nearly all attendees wearing masks and face shields.

More than 1.9 million people signed up for the “We travel together” tourism stimulus package on the first day of registration, a scheme devised to promote local travel as the industry has been battered by the pandemic.

The opposition has lambasted the government after foreign nationals were allowed to enter Thailand without enforced quarantine and claims there might have been other, unreported cases of arrivals slipping through the net.