Five people were hurt when this truck smashed into cars at a red light in May. Thailand this year posted the second-highest road-fatality rate in the world, the World Health Organization said. (Bangkok Post file photo)

A lack of key safety standards and poor enforcement of laws already on the books have combined to give Thailand the second-highest road-fatality rate in the world, according to a new World Health Organization survey.

Furthermore, the WHO concluded, road fatalities in Thailand were far higher than reported. Based on its models, the agency estimates 24,237 actually were killed in 2012, 42% more than stated by the Public Health Ministry.

Worldwide, the WHO said some 1.25 million people are killed in traffic accidents each year. And while many countries have stepped up efforts to improve their situations, including law changes and making vehicles and roads safer, low- and medium-income countries like Thailand lag behind. 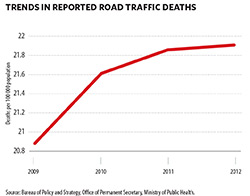 A full 90% of global road traffic deaths occur in low- and middle-income countries, even though they count only 54% of the world's vehicles.

The lack of standards is particularly noticeable in Thailand, which lacks a child-restraint law, performs no safety audits for new road-construction projects, carries out no regular inspections of road infrastructure, and has no policies to separate motorists from pedestrians and cyclists.

The WHO also noted that Thailand's national seat-belt law does not apply to all passengers in a car.

The agency also gave poor marks to enforcement of existing laws, giving the country's traffic police a three on a scale of 10 for their enforcement of speed limits. Police earned sixes for enforcement of drink-driving and motorcycle-helmet laws.

Yet the status report said only 52% of motorbike drivers -- who accounted for 70% of all road and highway fatalities - wore helmets and only 20% of pillion passengers. That mark, however, was a significant increase from the 3% recorded in 2007.

As for drink-driving, 26% of all road deaths can be attributed to alcohol, the WHO said.

Worldwide, nearly half of all those killed in traffic are either walking or on two wheels, the new report showed, with pedestrians accounting for 22% of all deaths, motorcyclists making up 23%, and cyclists 4%. 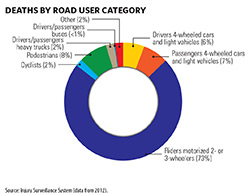 "Decision makers need to rethink transport policies," Etienne Krug, head of WHO's disability, violence and injury prevention unit, told AFP, warning that "the lack of policies aimed at vulnerable road users is killing our people and harming our cities."

The report found that road safety had improved significantly in countries with laws regulating five risk factors: speed, drunk driving, and the use of helmets, seatbelts and child seats.

Over the past three years, 17 countries, with a total of 409 million inhabitants, have adopted laws in at least one of these areas in line with international best practices, it said.

The WHO recommends that maximum speed in urban areas should be set no higher than 50 kilometres per hour. But only 47 countries, representing 950 million people, respect that recommendation, the report found.

Thailand's maximum urban speed limit, by comparison, is 80km/h. Its rural and highway limits are even higher at 90km/h and 120km/h, respectively, although local authorities can set lower limits.

The report also stressed the importance of banning drunk driving, noting that only 34 countries, with a total population of 2.1 billion, follow WHO recommendations to limit permitted blood alcohol levels to below 0.05 grammes, and for younger drivers to 0.02g.

"Twenty-one of these countries are in the European region, suggesting the need to extend good practice globally," the report said.