Department of Special Investigation (DSI) raided the Gig shrimp peeling factory last month and detained all the Myanmar workers to check their papers. The shed later closed, but many others continue to operate in Samut Sakhon, raising charges of slave-like treatment of migrant labour. (AP Photo)

The Foreign Ministry has insisted the European Union (EU) has acknowledged progress in the government's efforts to stamp out illegal fishing and slave labour activities in the country.

The EU is fully informed of Thailand's policies in combating human trafficking and maximising law enforcement against human trafficking in the fisheries industry, particularly with the proclamation of the new royal decree on fisheries, he said. 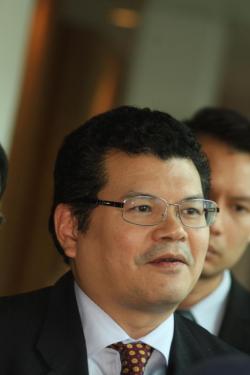 Sek: Working with the EU

He was responding to reports that the EU had issued a warning against Thailand to "promptly" address the human rights and slavery issues that have dogged its seafood industry if it wants to stave off an EU seafood import ban.

The EU is well aware that Thailand has anti-human trafficking policies and is also being kept informed about results of their implementation, including the promulgation of the decree, Mr Sek said.

The decree was sought as a way to short-track certain procedures which would normally have to go before parliament, as the government attempts to speed up its clean-up of the industry to meet the EU's concerns.

Concerned agencies have at the same time been inspecting fishing vessels and seafood processing plants and cracking down on illegal labour and human trafficking, he said.

Human trafficking suspects have been detained and prosecuted, he said.

According to an Associated Press (AP) report, EU Fisheries Commissioner Karmenu Vella said even though the 28-nation bloc was mainly assessing Thailand's improvements in stamping out illegal fishing, there was no sidestepping the slavery issue.

This followed news reports by AP that portrayed Thailand's fishing industry as being full of "slave labour".

Mr Sek said the EU delegation is scheduled to revisit Thailand in January next year as part of the ongoing dialogue between Thailand and the EU in addressing the IUU problem and improving regulation of the fisheries industry in Thailand.

Consultation on the progress of Thailand's efforts to resolve IUU fishing and ways to sustain aquatic resources will follow, he said.

As human trafficking in the fishing industry is also among the EU's top concerns, the visit of the EU delegation in January will provide a good opportunity for Thailand to demonstrate how much the country had achieved in tackling the problem, he said.

The efforts to address the problem consist of both suppressing IUU fishing activities and improving laws and regulations to ensure foreign migrants in the fisheries sector are properly registered in Thailand's labour system and fully protected under Thai law, said the spokesman.

No matter what the outcome of the EU's evaluation of Thailand's progress in tackling IUU fishing, Thailand will remain committed to solving the matter and sustaining aquatic resources, he said.

A government source said state authorities will call in the media Monday at Government House to talk about the slave labour issue raised by AP.

Officials trying to arrest fishermen for using illegal equipment triggered a violent clash with angry boat operators. They used hammers to attack and damage the officials' boat, and drove them off by brandishing knives.

Police who received a complaint from the government said the officials suffered "minor injuries".

The PM stressed the importance of maintaining stiff legal measures against illegal fishing activities and urged the fishermen to abide by the law, or else they may end up being prosecuted, said Maj Gen Sansern.

It would be better for frustrated fishermen to request talks with the authorities instead of resorting to violence as that would not only bring them criminal charges but also cause Thailand to be banned from exporting fishery products to the EU, he said.

In the event Thailand's export of fishery products to the EU is barred, the country may lose about 30 billion baht a year in export values, according to Maj Gen Sansern.

"The PM is well aware that a number of fishermen are suffering but he wants them to understand that law-breaking by a certain group of people may cause damage to the rest of the country," said the government spokesman.

"That's why authorities have to maintain their law enforcement duties," he added. 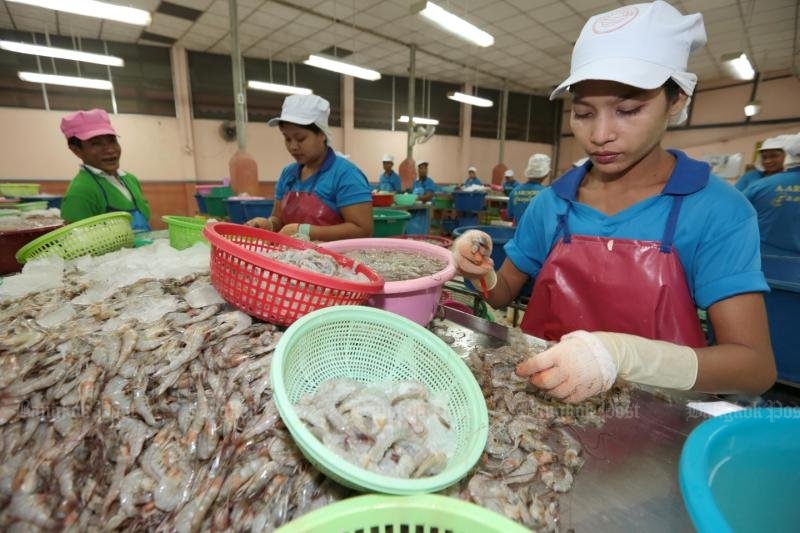 Police and troops inspected a shrimp peeling shed in Samut Sakhon last week and detained a fugitive human trafficker but made no other arrests. (Photo by Chanat Katanyu)