Uthai Thani — A study of the pros and cons of the planned construction of Mae Wong dam in Nakhon Sawan province is being looked at as part of the government's measures to cope with the country's perennial drought problems. 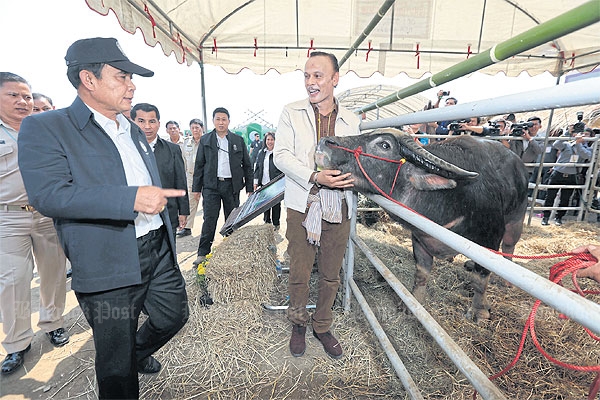 Prime Minister Prayut Chan-o-cha talks to a cattle breeder who showcases a water buffalo at an agricultural exhibition during his visit in Uthai Thani province. (Photo by Chanat Katanyu)

Prime Minister Prayut Chan-o-cha said on Friday he has instructed relevant agencies to look into possible negative and positive aspects of the project.

He said the construction may well be worthwhile if the dam is able to help ensure water for more than 300,000 rai of agricultural land in the area.

The premier was speaking after being briefed on water and agricultural management during his visit to assess the drought situation in Uthai Thani's Lan Sak district yesterday.

Gen Prayut, however, insisted no conclusion on the issue had been reached. He also did not elaborate about any more details of the study.

He also asked NGO groups which opposed the dam project to talk to the government to find common ground and possible solutions to the problem.

"It's impossible if people still protest against the government's project but they also want to have a better livelihood at the same time. Therefore, please stop instigating conflicts," Gen Prayut said.

The Mae Wong dam's reservoir will cover about 13,000 rai in the Mae Wong National Park in Mae Wong district and will hold about 250 million cubic metres of water. A feasibility study for the dam project was conducted in 1989, resulting in considerable opposition from environmentalists until now.

In 2012, the project was again pushed forward by Yingluck Shinawatra's government with a budget worth 13.2 billion baht. However, it was eventually suspended after facing strong resistance from members of the public.

Aside from the Mae Wong dam issue, Gen Prayut also urged farmers to plant crops which needed less water due to low water levels in several reservoirs nationwide and the limit on government subsidies.

"Farmers can't grow only rice as they did in the past because rice consumes more water than other crops," he said. "Today, irrigation areas face water management problems due to low water levels in reservoirs. Besides, the government still has to fund the drilling of over 1,000 artesian wells nationwide, each costing 200,000 baht."

Measures to tackle land problems must also be adjusted to help ease the drought crisis. The government has to study which crops are suitable for each region, and farmers must learn to utilise their land, he said.