Suda Thongdee, 42, of Waeng Yai district, charged with attempted murder of her newborn baby boy and burying him alive in Khon Kaen, is interrogated by police before taken for a crime re-enactment on Saturday. (Photo by Jakkrapan Nathanri)

KHON KAEN — A 42-year-old woman caught in Waeng Yai district for repeatedly stabbing and burying alive her newborn son confessed she had done it because she did not want him.

Suda Thongdee of Waeng Yai district was taken on Saturday for a crime re-enactment in a paddy field in Non Sawan village in the district, where her newborn child was found buried alive with multiple stab wounds.

She was escorted under tight security as angry people cursed and yelled at her.

The prematurely born baby boy had been severely stabbed and buried alive before being saved by a rancher who had taken her cows to graze in the area on Tuesday evening.

The baby is being treated in the intensive-care unit of Khon Kaen Hospital. Medical staff there called him "Ai Din" (scent of earth) because the reason he had not bled to death was that his 14 stab wounds had all been covered with dirt.

Pol Lt Gen Bunlert Jaipradit, chief of Provincial Police Region 4, said on Saturday that police investigators had looked for the baby’s mother and detained Ms Suda for questioning on Friday evening for suspected involvement in the stabbing of the baby boy.

A witness had told police that the woman and her husband were spotted near where Ai Din was found buried.

After being arrested, Ms Suda was taken for a physical check-up, which showed she had given birth to a baby five days ago, said Pol Lt Gen Bunlert. The investigators later found the infant’s placenta about 30 metres away from the burial site.

Confronted with the evidence and after intensive interrogation, the suspect confessed to having stabbed her own baby, said the police chief.

“The suspect confessed she did not want the baby as she claimed she already has three sons. We're investigating further whether more people were involved,’’ said Pol Lt Gen Bunlert.

According to the investigation, the woman and her husband had been hired to cut a tree on that day. While working, she told him that she needed to urinate. She then went to a nearby area where she went into labour and gave birth.

She told police she had used a wood scrap to cut the infant’s umbilical cord before stabbing him several times. She then used a plastic bag to fasten his neck to make sure he would die. She later dug a hole to bury him and covered it with soil and dry leaves.

While she was about to leave the site, the baby’s placenta suddenly came out, prompting her to take off her black sports trousers to cover the placenta before burying it nearby. She left the site, wearing only her pha tung wrap-around tube skirt, and returned home with her husband.

The woman was held in police custody on charges of attempted murder and assaulting and abandoning a child aged below 9.

It was not clear how long the baby remained in the ground. Police said they would hold a media conference soon after they have more details.

Charnchai Chanvorachaikul, director of Khon Kaen Hospital, said on Saturday afternoon that Ai Din could now breathe and had an 80% chance of survival.

"He can now breathe on his own and the wounds are getting better. However, infection remains a concern. If he's not infected over the next few days, he can be discharged," he said.

Following the reports, there have been several requests to adopt him as well as donations, both in cash and baby supplies.

"Together with the Khon Kaen child and family shelter, we'll open a bank account under Ai Din's name and a joint commitee will be set up to authorise withdrawals. Ai Din will be transferred to the shelter's care immediately after he's discharged," the doctor said. 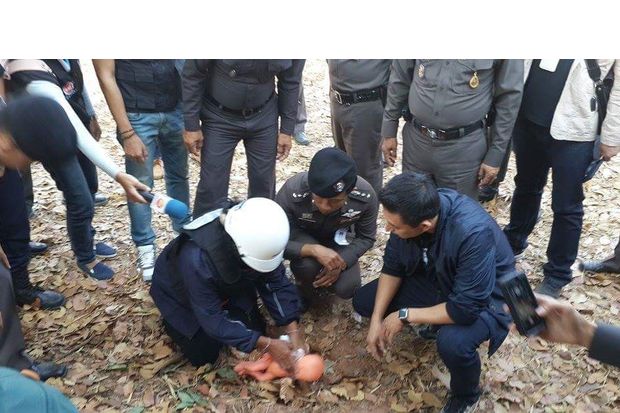