China agrees to share data on its dams
Thailand
General

The Dachaoshan dam is a key hydro-power source for China - and a major barrier on the Mekong for Thailand and other down-river countries. (File photo by AP)

China has agreed to share information on the management of dams in the Mekong River, known as Lancang in China, with other countries connected to the river, says Ministry of Natural Resources and Environment spokesman Suphot Tovichakchaikul.

The move aims to reduce the impact of these dams on millions of people who reside around the lower part of the Mekong River, he added.

Mr Suphot, as chief of the Department of Water Resources, said China's commitment will be indicated in the Sanya Declaration, which sets out guidelines for cooperation among the six members of the Mekong-Lancang Cooperation (MLC) deal: Cambodia, China, Laos, Myanmar, Thailand and Vietnam.

The first MLC leaders' meeting will start tomorrow and continue until Thursday in the city of Sanya in China's Hainan province.

The MLC cooperation guidelines will cover politics and security, economy and sustainable development, social-cultural cooperation and close relations among people. 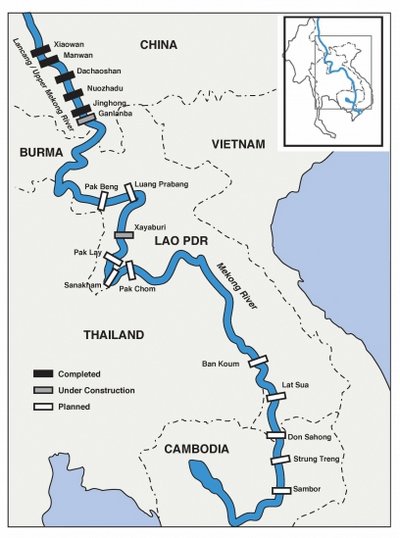 Key dams on the Mekong are shown on this map by InternationalRivers.org

China has already made an initial agreement on sharing water management in the upper Mekong River, according to Mr Suphot.

The mainland also pledged to tighten cooperation on joint research on floods, drought, water quality and water management in the Mekong River region.

"We will be able to respond to changes in water levels in the Mekong River more effectively as there will be no more 'unknown' data. We can run the model with more accuracy and efficiency and it will help limit the impact on people living around the lower river region," he said.

Freshwater weed is found only in the dry season, but disappears if the water in the river has never dried due to water being discharged by the dams all year round.

China has started discharging around 2,000 cubic metres of water per day into the Mekong River to help reduce the effects of drought in the lower Mekong countries. The releases will continue until April.

However, farming on the Mekong River's banks has been undermined due to the rising levels of water.

Montree Chantawong, campaigner of Towards Ecological Recovery and Regional Alliance (TERRA), said the Chinese government should support sustainable development in the Mekong River by maintaining the river's natural flow to encourage a balanced ecological system.

He said the Mekong has never dried because of the dams in China, which need to discharge water every day to generate electricity and help vessel transportation for commercial purposes.

China does not realise that many things, particularly natural resources, are lost when water can't flow naturally, Mr Montree said.

Pianporn Deetes, of the group International Rivers, said China's offer to share information on dam management, while welcome, is not enough.

She said the impacts are already visible and there has been no compensation or rehabilitation from China's end as the extent of the problem becomes evident.

Ms Pianporn insisted China should agree to joint water management as the river cannot be managed by one country alone as too many interests are at stake.

Conserving and protecting ecology should be the first priority for sustainable development among all Mekong River countries, she said.