The only easy access to the 11th century temple is through Thailand. It sits atop a 525-metre cliff. (File photos)

Cambodia is considering allowing access to the Preah Vihear temple from the Thai side, a move seen as underlining warmer ties between the two countries.

Cambodian Defence Minister Tea Banh said preparations have been made to allow passage to the temple via Pha Mor E-daeng on the Thai side, though discussions over the issue are still ongoing.

He said he was uncertain when access will be permitted, but the move would help foster tourism in the area between the two countries.

"I want Thai reporters to write good news for the benefit of a permanently cordial relationship, not only for the present time," said Gen Tea Banh.

He said Thai nationals are currently allowed to go to the temple from the Cambodian side.

This is the first time that Cambodia has spelled out an initiative to allow entry to the ancient Hindu temple from the Thai side of the border following years of disagreement, and border skirmishes, which resulted in the shuttering of the temple entrance on the Thai side.

Gen Tea Banh was speaking at a news conference after the 11th General Border Committee (GBC) meeting between Thailand and Cambodia in Bangkok.

He and his Thai counterpart, Prawit Wongsuwon, co-chaired the meeting. 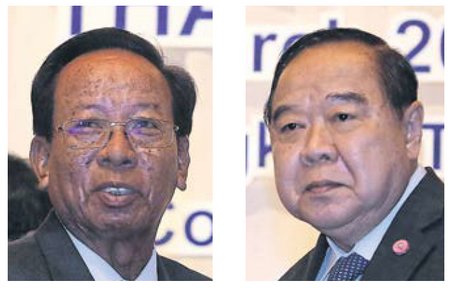 According to Gen Tea Banh, work is under way to foster a provincial partnership between Thailand's Surin and Kampong Thom situated in the Central Plains of Cambodia. Several issues concerning border cooperation were raised, including border passage, labour, anti-narcotics cooperation, security, agriculture, public health as well as quality of life, education, religion and culture.

Efforts are being made to set up a new permanent crossing between Ban Nong Ian in tambon Thakham of Sa Kaeo's Aranyaprathet district and Stung Bot in Cambodia, the deputy premier said, adding work is under way to stop the illegal logging of phayung, or Siamese rosewood, in Thailand's protected forests.

Referring to a common problem in which Thai offenders sneak across the Cambodian border, Gen Prawit said this issue has been ongoing for a long time as the border is rife with natural channels allowing access. He called on the armed forces of the two countries to be stringent in watching out for people sneaking across the border illegally.

Gen Prawit added that the Cambodian delegation also extended their gratitude to HRH Princess Maha Chakri Sirindhorn, who has provided assistance to Cambodia in terms of public health and education. He said the meeting did not touch on the territorial dispute surrounding the Preah Vihear temple.

As relations between the two countries are proceeding well, talks over the matter will be carried out in the future, he noted.

Phnom Penh closed off access to the Hindu ruins from Si Sa Ket's Kantharalak district in 2009 due to border conflicts in the area over territory claimed by both countries. The row culminated in a legal battle at the International Court of Justice in The Hague.

Visitors from Thailand can go as far as Pha Mor E-daeng cliff in Khao Phra Viharn National Park in the district bordering Cambodia to see the Unesco World Heritage site from afar, although tourists can reach the temple from the Cambodian side.

Preah Vihear was awarded to Cambodia by the International Court of Justice (ICJ) at The Hague in 1962, a decision further confirmed by the ICJ in 2013 after Thailand contested ownership of adjacent territory. (File photo)

In 2011, Cambodia built a road leading to the temple on its side in Ban Komui. The construction faced opposition from the Thai government, which said the work encroached on Thai territory.

Prime Minister Prayut Chan-o-cha, then the army chief, ordered his forces to construct a road leading to Wat Keo Sikha Kirisvarak, close to the Preah Vihear temple. The move resulted in armed clashes in the area. Cambodia later barred Thai nationals from visiting the Preah Vihear temple on the Cambodian side. The ban, lasting five years, was finally lifted in November last year. Thai officials have repeatedly called on Cambodia to open access to the temple from the Thai side, but still faced objections.

The International Court of Justice ruled on Nov 11, 2013 that Cambodia has sovereignty over the whole territory of the promontory of the temple and that Thailand was obliged to withdraw its forces from the area.

Observers say the relationship between the two countries has gradually improved since the military coup in Thailand on May 22, 2014.