The Immigration Bureau has defended its move to ask foreign visitors and expatriates to fill out an elaborate form, including personal and banking details, as they seek visas and meet reporting requirements.

But the bureau said most of the questions on the form -- such as which restaurants and clubs people frequent and which social media they used -- were not mandatory.

Pol Maj Gen Chatchawan Wachirapaneekhun, deputy chief of the bureau, who initiated the idea, said the information, plus an additional picture to be affixed to the form, would be useful for security measures.

The bureau will use the information to ensure the safety of tourists or those who work in Thailand, he said, assuring the details will remain confidential. 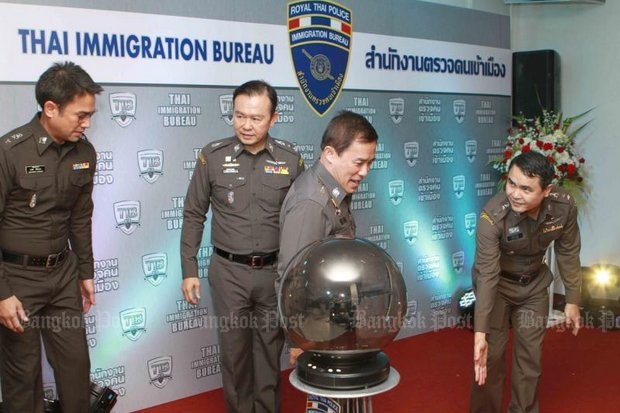 New Immigration Bureau chief Pol Lt Gen Nathathorn Prousoontorn (second from left) has approved a new and intrusive form for foreign temporary visitors and residents. The form is not official, or available in Thai. (Photo by Somchai Poomlard)

The bureau will analyse the data to help their efforts to prevent crimes, adding anyone who feels uncomfortable will not be forced to fill in the detalls.

A source at the bureau said the move is being implemented on a trial basis and was initiated by Pol Maj Gen Chatchawan and approved by Pol Lt Gen Nathathorn Prousoontorn, chief of the bureau. The bureau has since been flooded with complaints by foreigners worried about their safety and privacy, the source said.

The form titled Record of Foreigner Information entered circulation earlier this month. It asks for people's name, age and passport details. But it adds new sections to pre-existing forms, such as listing "all social media used by foreigner" and the names of places the applicant frequents, specifying clubs, restaurants, shops, hospitals and other places.

It also asks for bank account numbers, and information on any vehicle and licence plates of cars or motorcycles the applicant uses.

"I was shocked when I saw the contents of the three-page form I was asked to complete while applying for a re-entry permit at the One-Stop Service Centre at Chamchuri Square," said Chris Wotton, a 27-year-old writer, who has been living in Bangkok since 2012.

"One part of the form was particularly ridiculous -- asking for 'places frequented'. This is just crazy. Should I put down every local stir-fry restaurant, som tum stall, bar and 7-Eleven convenience store I visit? The form asks for very personal information."

He said recent online data leaks from overseas hackers have already shown immigration authorities do not appear able to safeguard data they already have.

Excerpts from the form posted to social media by foreigners. The three-page document, available only in English and bearing no government identification, asks for extremely personal information.

Tan Nguyen, 38, a Vietnamese correspondent from Thanh Nien newspaper who has been working in Bangkok since September 2014, said he is not willing to give any personal details.

"If they [the Immigration Bureau] force me to fill out a form, I would lie about the information they need," Tan said.

A 33-year-old Canadian national, who has been working in Thailand for nearly 10 years, but asked not to be named, said he felt uncomfortable providing his private information to Thai authorities.

"I have no faith in any government's ability to protect my private information," he said.