KANCHANABURI – Wildlife officials prevailed in a day-long cat-and-mouse game with intransigent monks over custody of 137 tigers on Monday, winning a court order to allow them to enter the monastery and finally begin taking the animals.

They gathered up three big cats and transported them away on Monday. Tuesday morning, they returned and quickly captured and removed three more.

On Monday morning, authorities from the National Park, Wildlife and Plant Conservation Department and police arrived at Wat Pa Luangta Bua Yannasampanno, better known as the Tiger Temple, for the high-profile transfer of the tigers to two wildlife-breeding centres in Ratchaburi province, only to find the gates locked.

Resistance had been expected after authorities announced on Saturday they would start moving the big cats that remained following two transfers of five each to the Pa Khao Son and Khao Prathap Chang centres in January and February.

Mr Adisorn then sent an official to obtain a Kanchanaburi Court order allowing authorities to search both the temple and the foundation, then remove the animals. The warrant was approved shortly before noon. 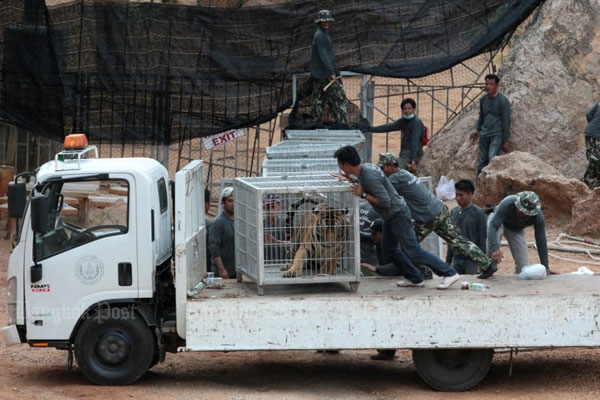 Wildlife officials load a cage containing a tiger onto a truck after they removed it from an enclosure at the Wat Pa Luangta Bua Tiger Temple in Kanchanaburi province. (Photo by Chanat Katanyu)

"We have a court warrant this time, unlike previous times, when we only asked for the temple's cooperation, which did not work," Mr Adisorn told Reuters.

Despite the order, the removal process dragged. Reports on Twitter from wildlife NGO representatives present accused the monks of intentionally trying to thwart the operation by feeding the animals before they could be sedated -- which poses safety risks to the animals -- and even releasing several of the big cats in an enclosed canyon so they would be harder to catch.

By the end of the day, authorities managed to cage only three of the tigers and take them away. Officials, however, vowed to confiscate and remove more tigers on Tuesday.

Mr Adisorn told him if the temple did not allow the transfers, it would be charged with intentionally possessing protected wildlife without permission under the 1992 Wildlife Conservation and Protection Act, an offence with a penalty of not more than four years in jail or a fine of not more than 40,000 baht, or both.

The Tiger Temple has been accused of being involved in the illegal wildlife trade for more than a decade. It has been the focus of inquiries since three of its originally 147 captive tigers reportedly disappeared in late 2014. However, police investigations have made little progress and wildlife protection officials have conceded that the case is "very sensitive". 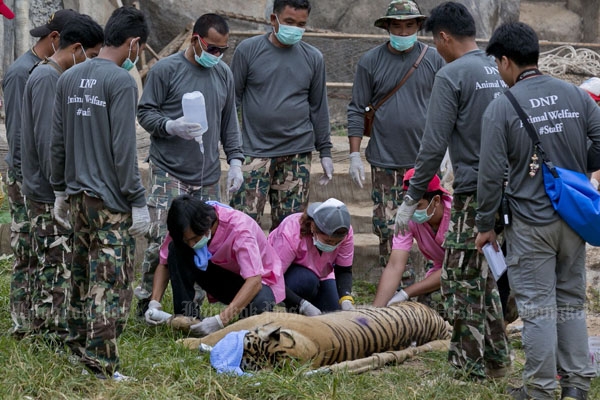 A tiger is sedated as officials start moving tigers from the controversial Tiger Temple on Monday. (Photo by Krit Phromsaka Na Sakolnakorn)

Wildlife activists have accused the temple's monks of illegally breeding tigers, while some visitors have said the animals can appear drugged. The temple denies the accusations.

Wildlife and animal welfare activists have long petitioned the Central Administrative Court to withdraw the zoo permit issued to the temple and the department informed the foundation about the planned relocation of the remaining tigers in advance.

Luangta Chan, the abbot of the temple and chairman of the foundation, recently notified the department that the foundation had already filed a suit with the Central Administrative Court against moves to relocate the tigers.

The foundation had asked the department to await the court's ruling before taking further steps to move the tigers from the temple.

But Mr Adisorn claimed on Monday the court had yet to accept the petition for consideration and the department has to perform its duty as guardian of the animals.

"Besides, the tigers belong to the state and we can't let the temple or the foundation use the for its own benefit," Mr Adisorn said. 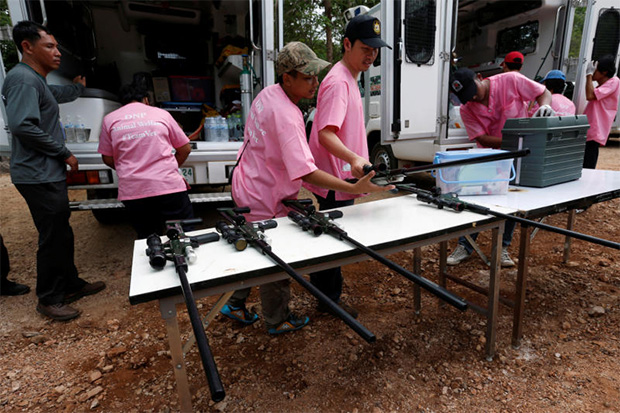 Officials prepare weapons with a sedative as they start moving tigers from the controversial Tiger Temple. (Reuters photo)

The department had prepared four teams of veterinarians and another reserve team for the mission. It planned to transport at least 20 big cats a day and expected the task to be completed in seven days, barring any obstruction. But given the resistance today, the mission would take longer than that, said Mr Adisorn.

The Tiger Temple is estimated to generate about 100 million baht a year from tourists who visit by the busload to pet and feed tiger cubs, walk tigers on leashes and take selfies with the animals, according to a National Geographic magazine report in January this year.

All of the tigers at the temple are supposed to have microchips implanted in them. However, it was revealed last year that the microchips had been cut out of the three adult males that disappeared in December 2014. The temple's longtime veterinarian, Somchai Visasmongkolchai, made the revelation after resigning his post and turning over the microchips to officials of the Department of National Parks, Wildlife and Plant Conservation.