Unofficial result of the referendum on the draft charter. The Election Commission says the counting for Sunday was frozen at 94%.

The draft constitution cruised to an easy win on Sunday in the long-awaited referendum as supporters overwhelmed opponents in what was not the tight contest that had been predicted.

The unofficial result from the Election Commission (EC) with 94% of the votes counted showed 15.56 million people backed the draft as opposed to 9.78 million who were against it.

The EC said the vote counting was frozen for Sunday. The counting will resume on Monday morning.

But the support for the extra question on the ballot paper was slightly behind the draft, with 13.9 million people, or 58%, voting for it as against 10 million, or 42%, who rejected it.

The second question asked whether voters should allow the Senate to join the House of Representatives in selecting a prime minister.

Prinya Thaewanarumitkul, vice rector of Thammasat University, told Spring News TV that the result showed people are sending the message through their vote that they want to see corruption-free politics.

The statement by Prime Minister Prayut Chan-o-cha ahead of the referendum that he would vote for the draft played a key role in building the momentum for voters, Mr Prinya added.

EC chairman Supachai Somcharoen said shortly after all polling units closed that the official result is expected on Wednesday, pending no complaints lodged to the election organising agency.

The EC expected 80% of 50.5 million eligible voters to come out to exercise their right in the referendum, but the turnout fell short as only 58% went to the polling stations.

The unofficial result was in line with polls carried out before the referendum which showed most voters would cast ballots to support the draft.

Constitutional Drafting Committee chairman Meechai Ruchuphan thanked supporters for accepting the draft and said all voices in the referendum would not be ignored when the drafting of organic laws begins. 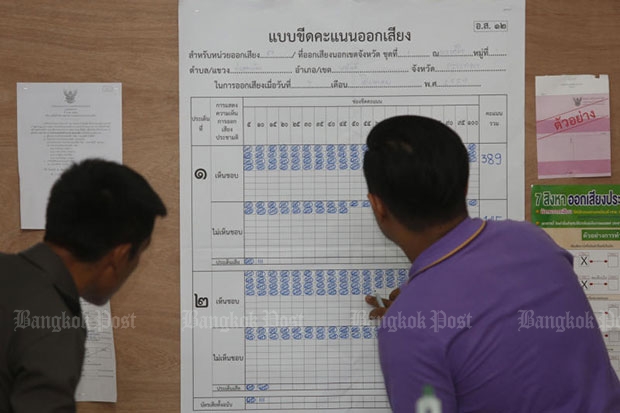 PARIS - World number one Iga Swiatek was the only top 10 women's seed left standing at the French Open on Saturday as Casper Ruud and Holger Rune gave Roland Garros a rare Nordic twist with landmark performances.