The probe into last week's multiple attacks in seven provinces has linked them to a prominent politician in the far South, while authorities are still arguing that a politically-driven motive is the most likely.

The government has now admitted the bomb and arson attacks in seven central and southern provinces involve insurgent elements, but says they are unlikely to be the masterminds behind the attacks.

A source close to the investigation said evidence suggests the devices used in the bomb and arson attacks in Prachuap Khiri Khan and six southern provinces were assembled in the deep South. 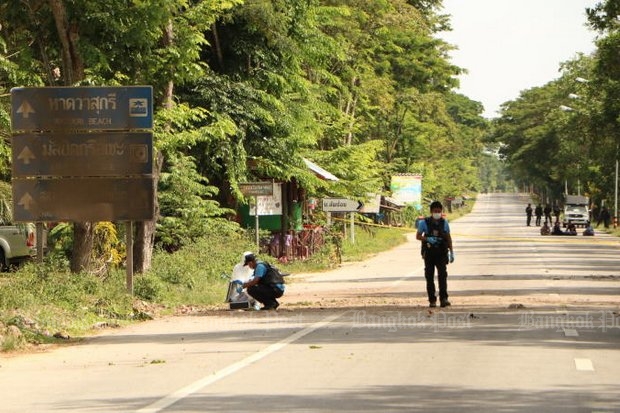 Following the attacks, a teenager in Narathiwat's Rangae district has been detained for questioning and an expanded investigation indicates the plot was engineered by a prominent political figure in the restive region.

However, the source said the motive behind the attacks remains unclear and authorities have found nothing other than documents related to the insurgent movement.

Meanwhile, results of DNA tests show that a sample of DNA collected from the Phuket blast on Wednesday matches that of a 35-year-old man identified as Ahama Lenga from Narathiwat's Tak Bai district, the source said.

The source said investigators are collecting evidence to seek a warrant for his arrest in connection with the Phuket blast.

Deputy Prime Minister and Defence Minister Prawit Wongsuwon, in charge of security affairs, said southern militants might have been hired to carry out the attacks.

He expressed confidence the attacks, despite being widely seen as bearing the insurgency's signature, are not an escalation of the southern violence.

He said some elements in the three southernmost provinces could have been involved in the attacks, but the motives remain unclear.

"There's no need to pressure me. If we have clear information, I'll tell you. If it's still sketchy, I can't say anything. This is a complicated matter, and at this stage we won't implicate anyone," he said.

National police chief Chakthip Chaichinda said Monday that police are still considering all possibilities while focusing on a politically-driven motive.

"We're covering all the bases but the referendum issue is our focus. But I can assure you it has nothing to do with the Erawan shrine bombing last August," he said.

Asked about similarities between the explosive devices used in the deep South and those in the seven provinces, the police chief said making connections is more important and the police are working to establish whether there is one.

"The materials can be bought anywhere. But it's the people that you have to investigate to see if there are connections," he said.

Pol Gen Chakthip said police have sought help from Malaysian authorities because the type of mobile phones used in the bomb blasts was sold in Malaysia only and it is possible the suspects might have fled there.

Prime Minister Prayut Chan-o-cha said authorities are still investigating the attacks and the government is not accusing any individual or groups of being behind the violence.

He urged the public to help authorities by keeping vigilant while calling on the media to be careful with their coverage.

Gen Prayut said this was a sensitive matter and the wrong kind of coverage could intensify hatred and conflicts.

Gen Prayut, who is scheduled to leave today for a one-day visit to Malaysia, is expected to raise the attacks in Thailand at his meeting with his Malaysian counterpart Najib Razak.

Thawip Netniyom, National Security Council (NSC) chief, told reporters Monday it is too early to conclude whether the attacks in the seven provinces are the work of the BRN as some groups have suggested.

Meanwhile, Singapore will continue to step up security arrangements after the string of bombings in Thailand, Singapore Defence Minister Ng Eng Hen said.

The attacks demonstrated how small arms, including explosives, are easy to obtain illegally, he said.

"Our security forces and agencies have already stepped up their activities and security arrangements. But if any attack occurs, I think we have to make sure we hold together," Monday's Today newspaper quoted the minister as saying.