Former House speaker Boon-eau Prasertsuwan, a veteran politician of Suphan Buri province, died at Siriraj Hospital at about 8am on Thursday. He was 97. 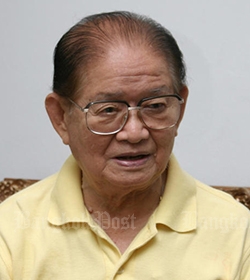 A royally sponsored bathing rite will be held at Sala 14 (Sala Suwanwanichkij) at Wat Debsirin at 4pm on Friday.

A son of Lang Suwanhong and Mrs Chuang, Boon-eua was born on April 13, 1919 in Bang Pla Ma district of Suphan Buri.

Boon-eua was a teacher at Kannasut Sueksalai in Suphan Buri in 1937. He later studied at a military school of medics and became an army sergeant. After World War II, he served as a medical instructor at Ananda Mahidol Hospital in Lop Buri before resigning in 1946 to open a clinic of his family.

Boon-eua made a debut in politics by running for the provincial council representing Bang Pla Ma district of Suphan Buri and were elected four times.

He ran for the House of Representatives in 1957 and were elected 10 times until 1996. He first joined the Democrat Party in 1975 and later moved to Thamsangkhom and Chart Thai parties.

He was made a deputy agriculture and cooperative minister in a government of former prime minister Prem Tinsulanonda, replacing Pol Col Krit Sangkhasap, who died in a helicopter crash in Chiang Mai in 1981.

He was a Prime Minister's Office minister and deputy prime minister in the government of Chatichai Choonhavan. In 1995, Boon-eua was elected speaker of the House of Representatives.

Boon-eua was bestowed the major general rank in a special case in 1997.

United Airlines Holdings Inc. has paid a $10 million deposit for 100 electric flying taxis, a sign that the airline is growing more confident in the nascent technology.

YALA: Police arrested a paramilitary ranger who allegedly shot and stabbed three people following a quarrel at a popular pub in Muang district of this southern border province early Friday, resulting in two deaths and one injury.