The supermoon of 2016 appears above the Phra Nakhon Khiri Historical Park, known as Khao Wang, in Phetchaburi. (Photo by Chanat Katanyu)

The government has said Christmas and New Year festivities can be organised but any entertainment activities should be toned down.

The suggestion came after the nation quietly celebrated the Loy Krathong festival Monday night without the usual fireworks and entertainment since the nation is still in mourning a full month after His Majesty the King's passing.

Many Loy Krathong sites went ahead with the annual festival but dedicated the tradition of floating a krathong on waterways, to remembering His Majesty the late King.

He was speaking after chairing a committee meeting Monday. 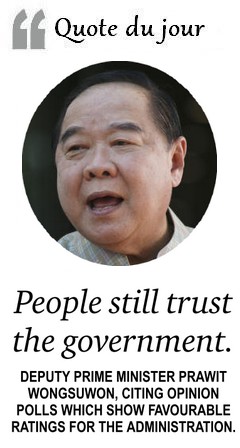 The committee recommended not staging the Nang Nopphamat beauty contest and other fanfare events such as fireworks and concerts, he said.

For the coming Christmas and New Year festivals, Gen Tanasak said they can be held but organisers have been asked to keep entertainment activities respectful. "I believe every Thai has discretion and knows how to act appropriately during this time of mourning," he said.

In response to the committee's recommendations, Wanthani Watthana, a Bangkok deputy clerk, said no formal Loy Krathong celebration was organised in areas around the Grand Palace this year.

Loy Krathong celebration sites closest to the palace were situated underneath Rama VIII Bridge, Santi Chai Prakan Park and Phra Athit Road, which also decided to skip entertainment activities and instead adopted a theme that reflected mourning, she said.

A total of 28 public parks in the capital were open until midnight Monday to allow people to go and float their krathongs.

Night entertainment venues in the city are allowed to go about their usual business, but visitors are advised to wear polite clothing bearing a symbol of mourning, said Gen Tanasak.

In Sukhothai, one of the country's best-known sites for celebrating Loy Krathong, people floated their krathong solemnly to remember the late King.

No entertainment activities were held like in past years.

Chiang Mai, which is renowned for its Lanna-style Loy Krathong festival, known as Yi Peng, opted to turn the festival into an event to remember His Majesty as well.

Hat Yai district in Songkhla province which normally stages one of the most vibrant Loy Krathong celebrations joined the rest of the nation in skipping entertainment activities during the festival.

The number of tourists coming from neighbouring Malaysia and Singapore was low this year. Overall hotel bookings in Hat Yai were 50% down during the festival, and was being blamed mainly on a weaker ringgit.

Kiti Imsuwan, president of a firework suppliers and traders association, said the production and import of fireworks has been banned at the moment and only a limited number of firecrackers normally used at funerals are allowed to be stored and sold.

Each year, the firework trade in Thailand is worth 10 billion baht on average, he said.

Meanwhile, a combined force of local administrative officials and soldiers raided a fireworks wholesaler at Chao Phrom market in Ayutthaya's Muang district late Monday afternoon. They seized about 100 firecrackers and other fireworks worth around 300,000 baht.

The unnamed owner was detained and was believed to have been charged with violating laws regulating firearms and fireworks that prohibit the unauthorised import or trading of fireworks.

He could face one month in jail and a maximum fine of 1,000 baht if found guilty of the crime.