Agencies to band together in corruption case
Thailand
Politics

Agencies to band together in corruption case

The country's anti-graft agencies assigned to investigate the Rolls-Royce bribery case will meet on Thursday to share information in the case and mull whether to take legal action against those involved in the bribery.

The anti-graft agencies include the Office of the Auditor-General (OAG), the National Anti Corruption Commission (NACC), the Transport Ministry and the Justice Ministry.

The Transport Ministry aims to wrap up its probe into the scandal within 30 days.

Auditor-General Pisit Leelavachiropas said agencies were working tirelessly to get to the bottom of the case and that the meeting would pool a lot of information.

"All anti-graft agencies are working to wrap up the case as soon as possible," Mr Pisit said. He was speaking at a seminar titled "Dealing with Corruption: This or Next Life" at the Thai Journalists Association (TJA). 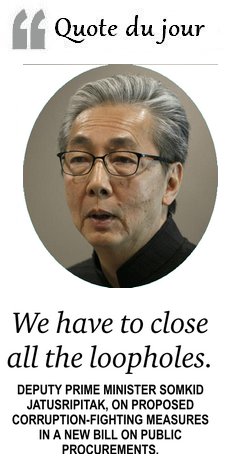 As for information obtained by the OAG earlier, Mr Pisit said Thai Airways International (THAI) Plc has sent details to the OAG which he believed could help identify people with British engineering giant Rolls-Royce who were involved in the bribery.

The firm admitted to bribing Thai state agents and employees of THAI.

Mr Pisit said his office had sent a letter to the British Serious Fraud Office (SFO) and he hoped to receive solid information from it soon.

The SFO recently revealed 12 counts in which Rolls-Royce had engaged in corrupt acts or failed to prevent bribery in seven countries -- Indonesia, Thailand, India, Russia, Nigeria and Malaysia.

The bribery case in Thailand involved the purchase of engines for THAI aircraft.

Spanning from 1991 to 2005, the scandal involves kickbacks totalling 1.28 billion baht.

The kickbacks were allegedly paid to help the British firm secure deals with the carrier.

"We are still waiting for vital information from the UK," he said.

"We have obtained some vital information from THAI, especially minutes of meetings involved to verify who should be involved with the bribery.

"Information we have already obtained is good. It helps us know the identities of people who are involved with the case."

Prasong Lertratanawisute, director of Isra Institute, said the UK is reluctant to give information to Thailand due to fears of political interference.

He added Thai anti-graft agencies had a duty to the public to adopt methods and ethics that make them more productive and effective.

Mr Prasong said efforts by Thai agencies to probe corruption have problems as many cases of graft are not properly investigated.

Mr Prasong said he was afraid the Rolls Royce bribery scandal would not be different from other cases.

Mr Veera said laws should be amended to ensure the punishment of corruption has no expiry date. He said he would keep fighting against all corruption cases in the country.