None of the seven members of the National Legislative Assembly will see their memberships terminated because they submitted leave-of-absence requests properly last year, according to the NLA secretary general.

She said each member had to cast in at least one-third of the votes, or 421, to maintain their status. Only the missed votes without prior leave-of-absence requests shall be counted as missed votes.

Based on the criteria, the seven members with questionable vote records earlier will keep their seats, she said. (continued below) 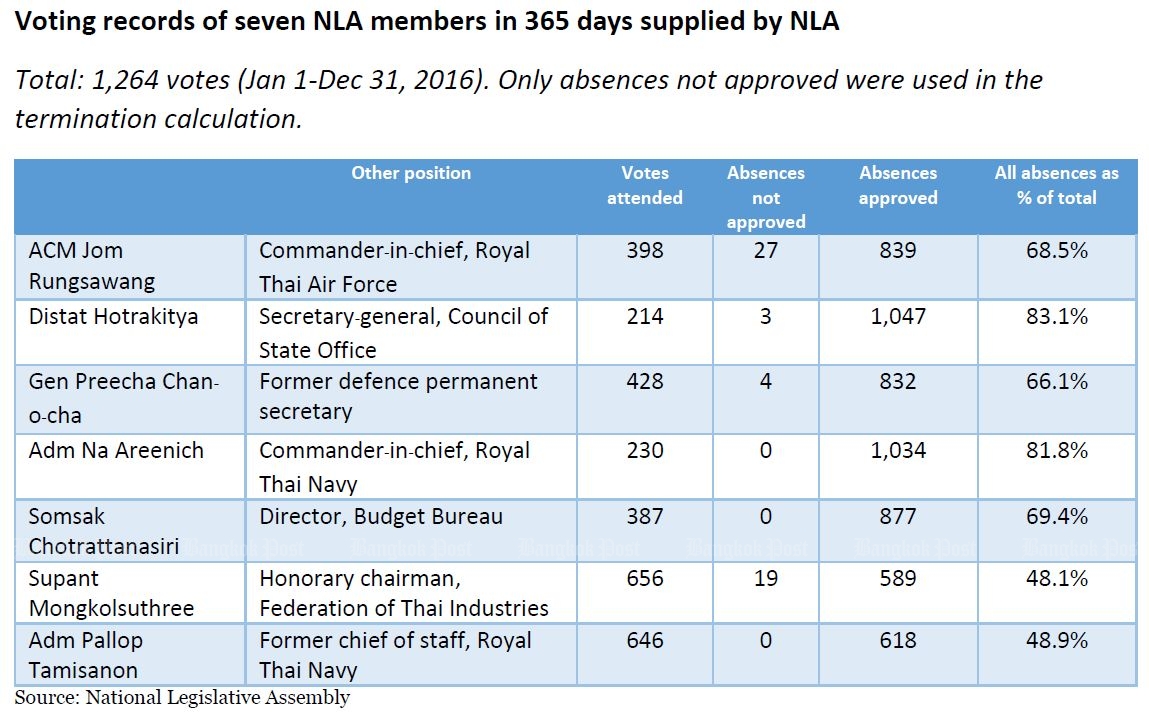 iLaw reported on Feb 5 seven NLA members might have missed votes to the point that their memberships could be terminated.

It gathered the data from the public records of NLA voting results, claiming NLA officials had refused to give it the meeting attendance records. Each NLA meeting may consist of one or more votes or no vote at all.

The charter and the NLA regulations require members to attend at least one-third of the voting meetings within a 90-day period in order to remain a member unless they have submitted leave-of-absence letters to the NLA president beforehand.

However, the timeframe the NLA used in the calculation was 365 days while its own regulation says the one-third rule applies to a 90-day period.

The high rates of absences by the seven NLA members have raised the question whether they should be allowed to keep the seats and salaries. Thay also pulled the focus on NLA president Pornpetch Wichitcholchai who approved such a staggering number of leave-of-absence requests and the junta's practice of appointing certain incumbent officials to so many positions.

NLA members do not receive salaries. Instead, each one is paid a position allowance of 71,230 baht and an extra allowance of 42,330 a month, totalling 113,560 baht. If he is on any NLA committees, he receives 1,500 baht for each meeting he attends.

If a member fails to attend half of the meetings scheduled each month, he will not receive the extra allowance for that month unless he is on a parliamentary trip approved by the NLA president.

Deputy PM Wissanu Krea-ngam said two years ago that a state official may not receive salaries from more than one source but may accept unlimited position allowances and other compensation so long as the payments are not called a salary.