Srisuwan taken off to military camp over plaque
Thailand
Politics

Srisuwan taken off to military camp over plaque

Royal Plaza, with insets of the original plaque honouring the 1932 Siamese Revolution (lower left) and the new plaque.

Political activist Srisuwan Janya, secretary-general of the Association for the Protection of the Constitution, was whisked away in a military van this morning for talks at the 1st Cavalry Regiment, according to media reports.

This happened after Mr Srisuwan showed up at the Government House public service centre to submit a letter to Prime Minister Prayut Chan-o-cha asking him to look for the 1932 Siamese Revolution memorial plaque, which has disappeared from the Royal Plaza and been replaced by a new, different one. 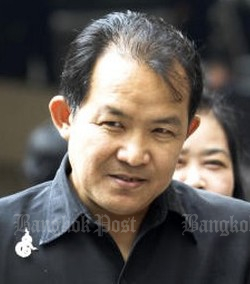 On his arrival at the public service centre, Mr Srisuwan was approached by soldiers. He was then invited to board a van waiting nearby to be taken to the 1st Cavalry Regiment. Two men were initially allowed to accompany him in the van.

On the way there, the two men were told to get out of the vehicle. They were each given 100 baht for transport back.

One of them said Mr Srisuwan did not say anything, but looked worried.

Before Mr Srisuwan's arrival at Government House, a group of people claiming to belong to the Group of Sovereign Thai People for the Nation, Religion and Monarchy submitted a letter to Gen Prayut, calling for him to remove the new plaque.

They said it was inappropriate for the new plaque, which they said represents the nation, religion and the King, to have been placed on the road surface.

They said it should be removed and put in a higher place elsewhere, but did not say where.

The original plaque, made of brass, was fitted into the road surface near the King Rama V statue, marking the spot where a group of people called Khana Ratsadon announced the revolution on June 24, 1932, which changed the country from an absolute monarchy to a constitutional monarchy.

The inscription on the old plaque reads: “Here at dawn on June 24, 1932, Khana Ratsadon brings into being the constitution for the sake of the country’s prosperity.”

The original plaque has now been replaced by a new one reading: “May Siam be blessed with prosperity forever. May the people be happy and cheerful and become the strength of the country. The respect for Phra Ratanattraya (The Three Jewels - Buddha, dhamma, Sangha), the state, one’s family, and faithfulness towards one’s King will all contribute to the prosperity of one’s state.” 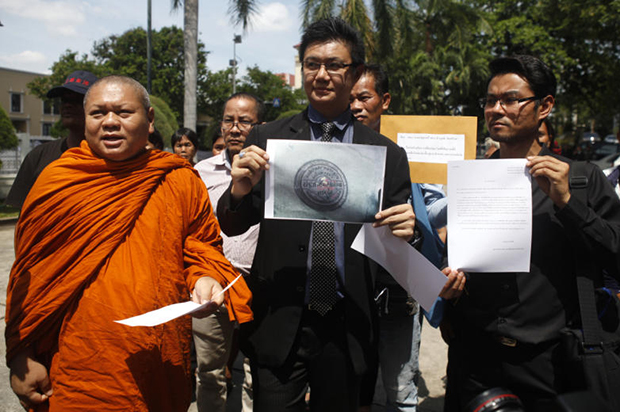 Representatives of the Group of Sovereign Thai People for the Nation, Religion and Monarchy submit their petition to the government, asking that the new plaque be moved to a more appropriate location. (Photo by Thanarak Khunton)

SUKHOTHAI: The floodwater that has inundated this former capital city for the past few days was gradually receding on Tuesday, as people struggled to recover from what is said to be the worst flooding in 10 years.

KANCHANABURI: Thirteen Myanmar job seekers were arrested for illegal entry after they crossed the border into Thailand in Muang district on Monday.

B230m paid out in jab compensation

A total of 464 people who have died or become severely and permanently disabled following Covid-19 vaccinations have so far been financially compensated by the government's no-fault compensation programme for vaccine recipients.