Measure to go through many more stages

Prime Minister Prayut Chan-o-cha has promised to arrange a forum to hear the views of members of the media on the controversial media bill that aims to regulate the industry.

The prime minister made the remarks Tuesday as he met representatives of media organisations led by Pramed Lekpetch, president of the Thai Journalists Association (TJA) at Government House.

On behalf of 30 media organisations, Mr Pramed handed an open letter to the prime minister to ask him to exercise his powers to thwart the bill. 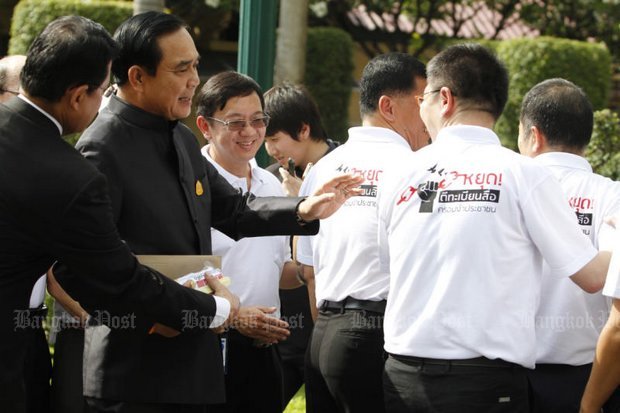 Members of the media showed up at Government House on the eve of World Press Freedom Day Monday with shirts protesting against the premier's 'media reform'. (Photo by Thanarak Khunton)

Gen Prayut said the bill, which was endorsed by the National Reform Steering Assembly (NRSA) on Monday, will still have to go through further procedures before its enactment.

The bill will have to go before the cabinet for consideration and then the National Legislative Assembly, the prime minister said. 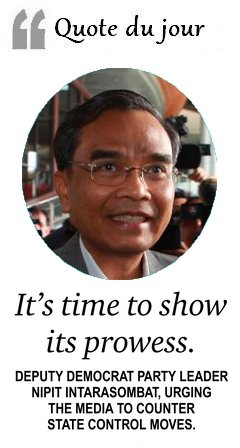 Since the new constitution has come into force, the bill must also go through a process under Section 77 of the new charter which stipulates that before any laws are rolled out, the government must hear out stakeholders' opinions, Gen Prayut added.

The media representatives told Gen Prayut that media organisations had also come up with proposals to solve problems related to the media but the NRSA's media reform panel had ignored them.

Gen Prayut said members of the media can send proposals on the media bill to the government as the cabinet will discuss a process to hold the forum under Section 77 of the new charter.

"Don't worry. All issues of concern will be jointly discussed. The bill has both positives and negatives," he said.

"Don't blame each other. I know that all involved have good intentions and so does the government," Gen Prayut said.

"Sometimes, you get angry and that's normal. I will try to do my utmost to be patient and take the country forward. Thailand has been stalled for more than 10 years due to conflicts," the prime minister said.

Gen Prayut also urged the media to serve as a government mouthpiece to promote what is right and benefits the public.

He insisted he had not tried to restrict the media. If he had wanted to gag the media, he could have used his power to push for a quicker passage of the media bill, he said.

Gen Prayut said that if the media wants to regulate itself, it must be sure it is up to the task.

"Don't forget that I still give the media their freedom. I have not yet sued anyone or ordered media closures. If you find any flaws [in the media bill], tell me how to fix them," Gen Prayut said.

The NRSA on Monday endorsed the media bill after making changes to two controversial issues in an apparent attempt to ease pressure from the press as well as critics.

The bill was drawn up by the NRSA's media reform committee headed by ACM Kanit Suwannate.

Under the revised version of the bill, the contentious plan to licence individual journalists was dropped. However, journalists would be required to obtain certificates from their respective media companies. 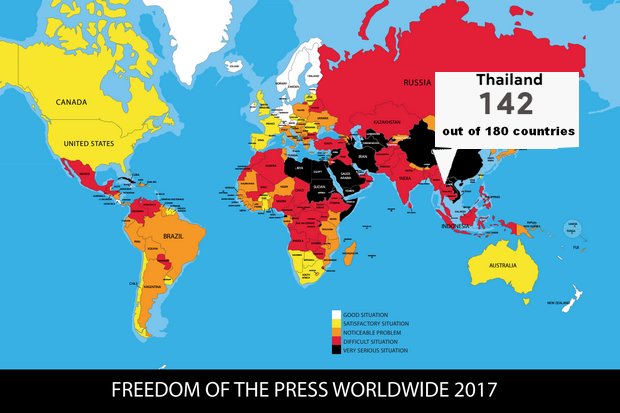 The rankings of world press freedom were issued last week by Reporters Without Borders.

As for the much-criticised 15-member national media profession council, which would include permanent secretaries from the PM's Office and Culture Ministry, state representatives will now serve on it during the five-year transitional period.

The bill was endorsed in a vote with 141 members for the bill, 13 against it, with 17 abstentions.

According to the media's open letter handed to the prime minister, the 30 media organisations see the bill as hostile towards a free press and in breach of several charter provisions.

If passed into law, the bill would put the media at risk of interference, and restrict media freedom to express the opinions of the media and the public, the letter reads.

In the letter, the media organisations also called on the government to comply with Section 77 of the new charter. They also insisted that they will stand by the principles of self-regulation.

Also Tuesday, ACM Kanit said the NRSA media reform panel will have 30 days to revise the bill as suggested by the NRSA.

The bill will be revised based on suggestions made by NRSA members during the debate on Monday while suggestions that would cause conflict or future problems will be avoided, ACM Kanit said.

Changes will also be made to a provision of the bill which deals with the definition of mass media professionals, ACM Kanit said, referring to Section 3 of the bill, which has been criticised by the 30 media organisations as too broad.

He said changes will be made to provide clear details about each form of media, be they the mainstream media, online media, or social media such as Facebook.

Under Section 3 of the media bill, media professionals are defined as those who communicate all kinds of information and news which serves a public purpose to the general public, no matter in what form. They also do this regularly for regular payment from owners of media outlets or receive any income from the job, either directly or indirectly.