A forensic expert gathers evidence from the scene of the explosion in the Phramongkutklao Hospital waiting room on May 22. (File photo)

Police believe they have identified the culprits behind a bomb attack at Phramongkutklao Hospital on May 22, which injured 25 people including retired officials, and are now gathering evidence to seek arrest warrants, national police chief Chakthip Chaijinda said Monday.

He said he hopes to see the warrants issued this week but refused to disclose details on the chief suspects, including how many people are on the list or their names or nationality.

Three hospital employers have been brought in for questioning but Pol Gen Srivara Ransibrahmanakul, who is leading the investigation into the case, and who serves as Pol Gen Chakthip's deputy, did not say if they are still suspected of being involved in the blast.

The police chief's remarks come as Deputy Prime Minister and Defence Minister Prawit Wongsuwon said about 50 suspects were in custody and awaiting interrogation over the explosion at the dispensary's waiting room, which is named in his honour. 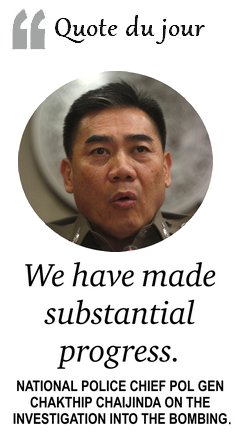 Police are also probing whether those who are believed to responsible for last week's attack had a hand in two other recent explosions in the capital, Pol Gen Chakthip said.

He was referring to a bomb that detonated in front of the National Theatre near Sanam Luang on Rattanakosin island on May 15 and another blast outside the old Government Lottery Office on Ratchadamnoen Klang Avenue on April 5.

Amid criticism that deploying 201 police officers to look into the three blasts may be excessive, the national police chief said the magnitude of the attacks justified marshalling resources and personnel on that scale.

Meanwhile, Pol Gen Srivara said forensic officers have been ordered to gather more evidence at the hospital. Sounding a rare plaintive note, he described his satisfaction with how the investigation was progressing at "just 20%".

The hospital attack coincided with the third anniversary of the 2014 coup and army chief Chalermchai Sitthisat said last week police believed the mastermind was none other than red-shirt hardliner Wuthipong "Kotee" Kochathamakun.

Mr Wuthipong, who reportedly fled to Laos after a warrant was issued for his arrest in April 2014 on a lese majeste charge, has also been implicated in another case that saw a cache of weapons confiscated in Pathum Thani in March. On Monday, Gen Prawit refused to be drawn on whether the series of blasts would delay the long anticipated general election that is expected next year.

Officials have focused more on bolstering security, with agencies told to beef up measures in community areas and check that CCTV cameras there are working, defence spokesman Kongcheep Tantravanich said, citing a Defence Council meeting chaired by Gen Prawit.

The spokesman said local people should monitor new faces in their communities who act suspiciously, and use their smartphones to record any strange activity that may be of interest to police investigations.

"Security officers need cooperation from people in all sectors to help stay vigilant," Maj Gen Kongcheep said. He said citizens can even use the messaging app Line to share information.

Gen Chalermchai, who is also secretary-general of the National Council for Peace and Order (NCPO), has instructed agencies operating under it to work harder to identify potential security threats. He issued the directive to NCPO officials during a Monday meeting with officials.