Prime Minister Prayut Chan-o-cha ordered security authorities to check border crossings and search for former prime minister Yingluck Shinawatra on Friday, commenting "I thought she was brave enough to show up", after she failed to appear for the ruling in her trial.

"I have told security authorities to find out if she is really ill and where she is," Gen Prayut said.

"I also told them to look at legal and illegal border passes. This morning I was happy, thinking Ms Yingluck was brave enough to show up for the ruling," Gen Prayut said.

Ms Yingluck failed to show up at the Supreme Court's Criminal Division for Holders of Political Positions in Bangkok on Friday for the ruling in her trial for alleged dereliction of duty in overseeing her government's loss-ridden rice-pledging scheme. She is liable to a maximum prison term of 10 years if convicted.

Her lawyer filed a motion claiming that Ms Yingluck was sick as result of Meniere's disease, with symptoms of dizziness and severe headaches, and could not travel to the court. He did not present a medical certificate.

The court ruled that "...it was not convincing that the defendant was sick to the extent of being unable to travel to the court."

It issued a bench warrant for Ms Yingluck's arrest and seized her 30 million baht bail bond.

Asked if Ms Yingluck was still in the country, Gen Prayut said, "There is no such report... We are looking for her."

"It was initially good as she said she would hear the ruling. The court trial has been fair. But she did not appear because of illness. She is ill, but we are still unable to find her," Gen Prayut said.

Asked if he had expected Ms Yingluck to flee, Gen Prayut said, "I never thought so, because she always said that she would defend herself, and people at the Pheu Thai Party said she would be there."

Gen Prawit said it was likely Ms Yingluck had fled the country. There were many routes she could have used to do so.

There were reports she left through Koh Chang, but they had not been verified, Gen Prawit said. The island is in the eastern province of Trat, bordering Cambodia. (continues below) 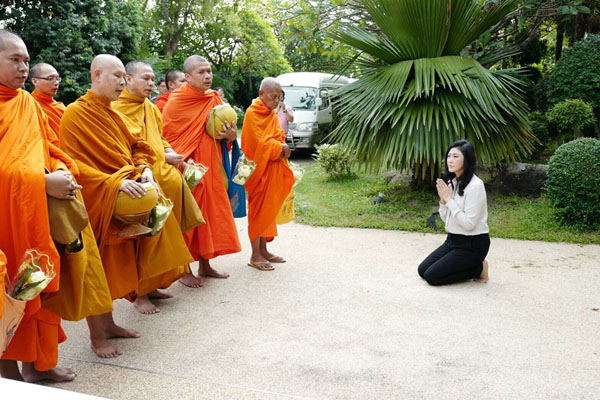 The picture from the Facebook page of Ms Yingluck Shinawatra was posted on Wednesday with a message reading she was making merit at her residence on Wednesday morning.

Gen Prawit denied that security authorities intentionally let Ms Yingluck escape. They had followed her and reported she had not left home for two days, Gen Prawit said. Any official who facilitated her escape would be punished.

Gen Prawit said he did not know if Ms Yingluck's presumed escape had been planned in advance. Photos of her merit-making activities had just been posted on social media.

Immigration police commissioner Natthathorn Prohsunthorn said he had no information of Ms Yingluck's departure through any legal channel. He did not think Ms Yingluck would use a natural border pass.

Pol Lt Gen Natthathorn said the court had prohibited her leaving the country without permission when allowing her release on bail during the trial.

According to unconfirmed media reports, Ms Yingluck left home on Wednesday night in the vehicle of a high-level government official. She went to Koh Chang and then entered Cambodia, where she boarded a private jet to Singapore.

She would join her elder brother and former prime minister Thaksin Shinawatra in Dubai, reports said.

Thaksin left Thailand in 2008 just before the Supreme Court sentenced him to two years in prison for conflict of interest, in which his then wife bought state land in Ratchadaphisek area of Bangkok during his tenure as prime minister. 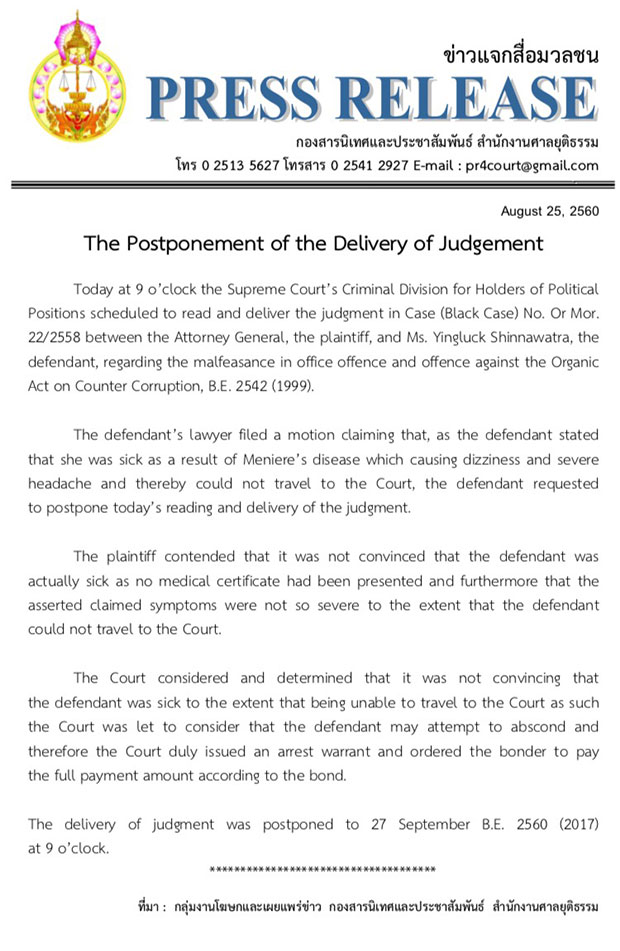