Wants to wait until all organic laws in force

The general election will take place after all election-related laws are promulgated, Prime Minister Prayut Chan-o-cha said Tuesday after a mobile cabinet meeting in Chanthaburi.

He was responding to a growing clamour for him to announce precisely when the poll will be held.

Gen Prayut said the poll date will only be set after all election-related laws have come into force. 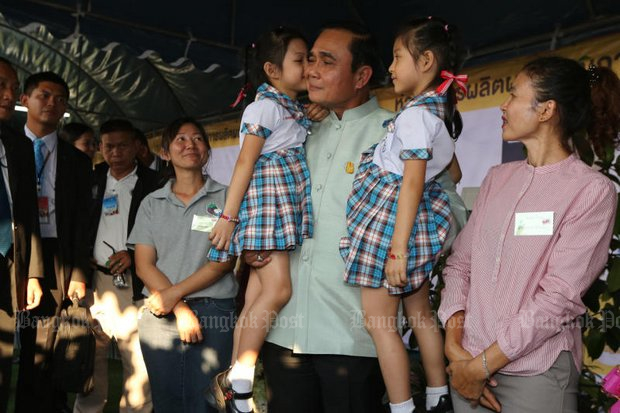 Prime Minister Prayut Chan-o-cha has a moment with twin girls in Chanthaburi (he has twins of his own). While he gave the impression of a campaigning politician, the premier refused to set an election date.

The election will take place when everything is ready, he added.

Gen Prayut had previously announced that an election would be scheduled tentatively for this November, but the National Legislative Assembly (NLA) voted last month to delay enforcement of the organic bill governing the election of MPs by another 90 days.

This would effectively put the poll off until February 2019.

According to the constitution, an election must be held within 150 days of the four election-related laws being promulgated.

The NLA forwarded the organic bills on the election of MPs and selection of senators to the Constitution Drafting Committee (CDC) and Election Commission (EC) to study, last Thursday.

They are the last of four organic bills essential for holding a general election to have cleared the NLA.

The other bills pertain to political parties and the EC. The bill on the EC is being checked by the Constitutional Court with regard to the qualifications of election commissioners.

The CDC wrote the drafts and would want to see if NLA scrutiny has preserved the principal elements of the bills.

The EC, meanwhile, needs to find out if the amended bills now contain content which could prove problematic in organising elections.

After examining the bills over the course of 10 days, the CDC and the EC will decide whether there are issues needing to be addressed.

If that is the case, a joint panel representing the CDC, EC and NLA will be formed to iron out any contentious points. The joint panel would have up to 15 days to wrap up its work.

Its work would not affect the poll date since it falls within the time frame for enacting the organic laws.

Also Tuesday, CDC chairman Meechai Ruchupan said numerous amendments were made during the NLA scrutiny stage of the organic bills on the election of MPs and selection of senators.

A key principle of the organic bill on the election of MPs is to ensure votes are cast secretly, justly and cleanly, Mr Meechai said.

He voiced concern about an amendment which allows others to cast votes on behalf of blind people.

Mr Meechai questioned whether this would be in secret and how blind people would know if the people casting their ballot for them would vote for the candidates they want.

Another issue involves the NLA panel changing polling times from 8am-4pm to 7am-5pm, which would affect election staff, who would have to wake up at 3am to prepare polling stations, Mr Meechai said.

PM Prayut will not join an Asean summit on Myanmar and has assigned the foreign minister to represent Thailand at the meeting in Jakarta, according to a government source.

PROMOTION OF PREVENTION AND SUPPRESSION OF CORRUPTION