GIVE THE POWER BACK: Pro-election activists join a protest led by Rangsiman Rome (wearing orange T-shirt) demanding the regime hold elections this year.

Leaders of the anti-coup activists on Saturday said their groups will continue to defy the ban on political activities, and they plan to organise further rallies calling on the prime minister Prayut Chan-o-cha to stick to his promise of holding a general election this year.

The rally near Democracy Monument on Ratchadamnoen Avenue started at 4pm and attracted a crowd of more than 500 protestors who joined in chants of “Election! Election!” and “We detest the dictatorship!” while marching along the pavement.

Rangsiman Rome, leader of the Democracy Restoration Group, Sirawith Seritiwat, leader of the Start Up People group, and lawyer Arnon Nampa joined the protest despite the Criminal Court issuing arrest warrants against them on Friday for violating the National Council for Peace and Order (NCPO) ban on political gatherings.

“This will be the start of many more [rallies] to come,” said Mr Rangsiman in an angry speech to the crowd. 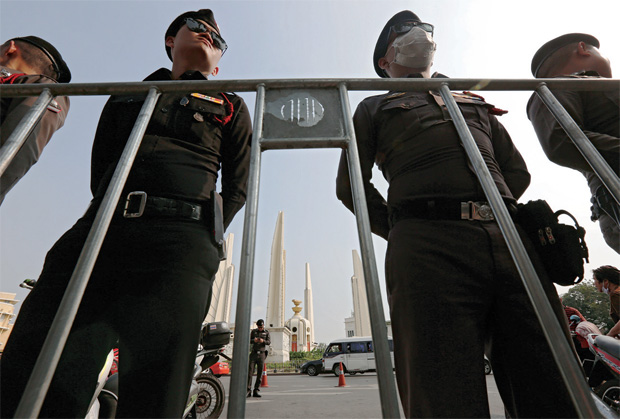 NO-GO ZONE: Metropolitan police set up barricades around Democracy Monument to prevent the protesters from occupying the road and the monument.

He also posed a question for politicians who he accused of disappearing since the NCPO took power.

“Where were you during the last four years while we were risking our lives and freedom? You are no longer the politicians of the people. We will no longer vote for you!” he shouted.

The three went with police officers to Pathumwan police station to hear the charges after the march, at almost 8pm.

Red-shirt leader Sombat Boonngamanong, who was among the 39 people charged with illegal assembly on the Pathumwan skywalk late last month, was also present at the rally.

Earlier in the morning, Aekachai Hongkangwan, another of the four who had a warrant issued against them, was arrested at his house in Bangkok and taken to Pathumwan police station.

Rows of barricades had been set up by police along the streets around the monument to force the crowd to stay on the pathway. Several hundred officers were brought in to secure the space.

One protest organiser asked for the barricades to be removed but his request was denied as officers said they had been placed for the “safety of the crowd”.

At one point the protestors aimed chants of “We’re not afraid of you!” at police, who responded with a megaphone announcement saying: “It’s your democratic right to demonstrate but you have to respect the law.”

Mr Arnon, also via a megaphone, was heard shouting: “Today we are moved from the streets, but in the future we will reoccupy the streets.”

Later on, Mr Sirawith stood in the back of a specially prepared truck and addressed the crowd via a microphone and loudspeakers.

Among the protesters, who were mostly in their 40s or over, was 62-year-old Wanna Boonchert, who said she had come to join the calls for an election and democracy.

She stated that the NCPO was suppressing the people by denying them their right to express themselves politically.

A protestor named Moddang (who did not wish to disclose her full identity) said she was keen to see the junta leader replaced by a democratically elected politician.

“I don’t know whether the prime minister we elect will be good or not, but at least we will have chosen for ourselves,” she said.

Besides calling for donations to support their activities, the protesters yesterday also disseminated anti-dictatorship posters which contained images comparing the coup makers to mosquitoes.

In a separate development, the spokesman for the National Legislative Assembly’s whip, Jate Siratharanon, said he expects a tripartite joint committee will be set up to work on the organic laws regarding the election of MPs and the selection of senators after the Election Commission and the Constitution Drafting Committee both filed opposition to the draft laws approved by the NLA.

The joint committee is expected to be set up next week and will have 15 days to submit its report.

The constitution requires that an election must be held within 150 days of the promulgation of the required laws. These two organic laws are the last to be deliberated by the NLA.